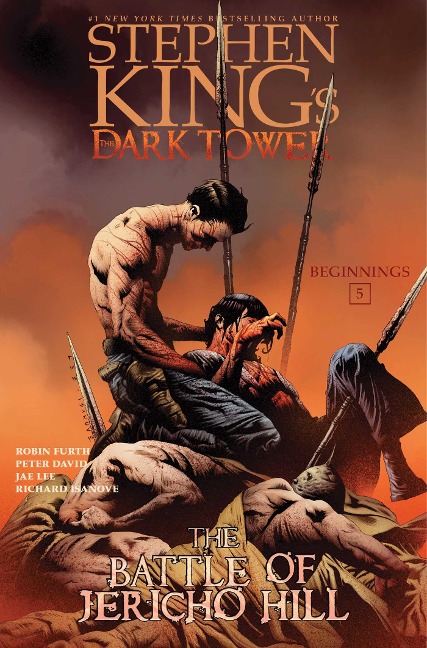 The Battle of Jericho Hill

Enter once more the world of Roland Deschain—and the world of the Dark Tower...now presented in a stunning graphic novel form that will unlock the doorways to terrifying secrets and bold storytelling as part of the dark fantasy masterwork and magnum opus from #1 New York Times bestselling author Stephen King.

"The man in black fled across the desert, and the gunslinger followed." With these unforgettable words, millions of readers were introduced to Stephen King's iconic character Roland Deschain of Gilead. Roland is the last of his kind, a "gunslinger" charged with protecting whatever goodness and light remains in his world—a world that "moved on," as they say. In this desolate reality—a dangerous land filled with ancient technology and deadly magic, and yet one that mirrors our own in frightening ways—Roland is on a spellbinding and soul-shattering quest to locate and somehow save the mystical nexus of all worlds, all universes: the Dark Tower.

It has been nine years since the fall of Gilead, and the handful of survivors—proud young gunslingers led by Roland Deschain—have been flushed out beyond their homeland's boundaries, where they can only watch as time continues to take its toll. For time is now a cruel instrument of violence ruled by "the Good Man" John Farson and his monstrous followers, who are making their move to dominate all of Mid-World itself. But despite the forces of the Affiliation having long been broken apart, there is still rebellion left in the heart of Roland and his ka-tet. With treachery abounding everywhere and the odds overwhelmingly against him, it is time for Roland to make his last stand for all that is good and face John Farson and his corruption of Mid-World head-on—even if he dies trying....