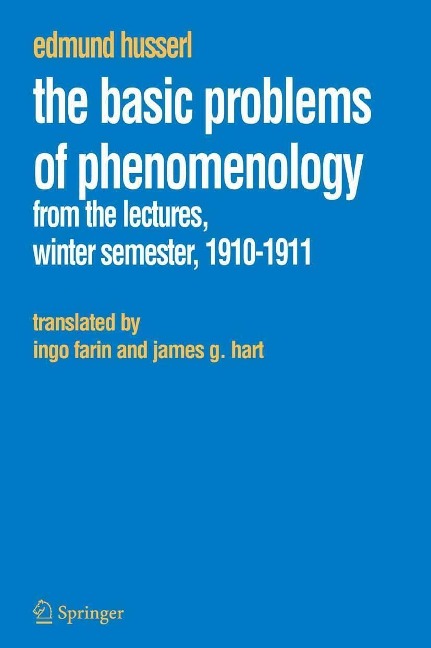 The Basic Problems of Phenomenology

The editor, Iso Kern, of the three volumes on intersubjectivity in Husserliana XIII-XV, observes that in his "Nachlass" Husserl probably refers to no other lecture so often as this one, i.e., "The Basic Problems of Phenomenology (1910-1911)". Husserl regarded this work (along with the 1907 "Five Lectures") as basic for his theory of the phenomenological reduction. He regarded these lectures as equally fundamental for the theory of empathy and intersubjectivity, for his theory of the life-world, and for his planned "great systematic work." It contrasts favorably with several later "introductions" because, although quite brief, it has a larger scope than they do and conveys in a relatively elementary way to the students the sense of fresh new beginnings. Further, with the appendices, it reveals Husserl in a critical dialogue with himself. That the second part of the lectures was never written down, can be accounted for in part, because at that time Husserl was busy writing the 1911 path-breaking essay, which complements these lectures, "Philosophy as a Rigorous Science." TOC:Translators' Preface. I: The Natural Attitude and the "Natural Concept of the World".- II: Basic Consideration: The Phenomenological Reduction as Achieving the Attitude Directed Toward Pure Experience.- III: Preliminary Discussion of Some Objections To the Aim of the Phenomenological Reduction.- IV: Phenomenology's Move Beyond the Realm of the Absolute Given.- V: The Phenomenological Uncovering of the Whole, Unified, Connected Stream of Consciousness.- VI: The Uncovering of the Phenomenological Multiplicity of Monads.- VII: Concluding Considerations on the Significance of Phenomenological Knowledge.- Appendices.