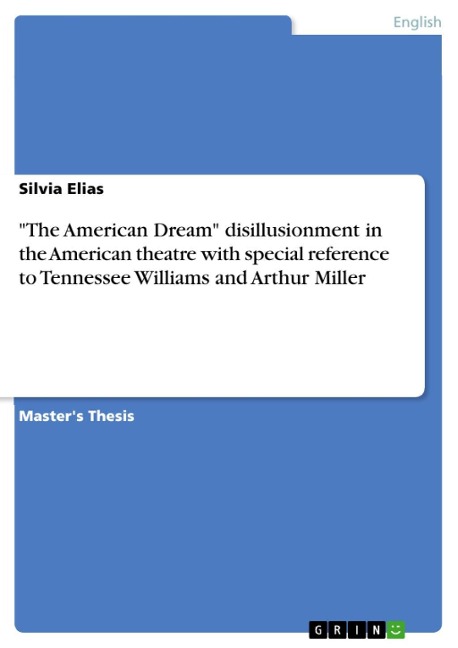 Master's Thesis from the year 2011 in the subject American Studies - Literature, grade: Master's Degree, University of Alexandria (Faculty of Arts (English Dept.)), language: English, abstract: Dreams are the only universal liars who never lose their reputation for veracity because "hope is the poor man's bread" said Gary Herbert  to his people. This is how the American Dream emerged and survived to be a legend that knew its way to people's hearts all over the globe. It is the dream of freedom, equality, opportunity and making fortunes; the golden chance to those who can obtain the green passport. It is what drove millions everywhere to immigrate both legally and illegally to the US in search for a better future for them and their children.
Unfortunately, one cannot make dreams come true unless he/she wakes up because in fact they are always too good to be true. Americans have realized that their dream is slipping away due to their financial crisis, deteriorating economy and growing population. However, they had to keep promoting their merchandize, entertaining their audience to maintain their superiority, leadership and grandeur. For years, American playwrights praised America's alleged welfare offered to the oppressed and the persecuted. Later, dramatists started disillusioning their audience; revealing the ugly face of reality behind the perfect dream.
In an attempt that is unique of its kind, this research traces how the American Dream (the notion that shaped a nation) was depicted in different works of art by various playwrights with special reference to two towering figures of American literature; Tennessee Williams and Arthur Miller. Throughout my project, I was exposed to different points of view of both American and Un-American writers. Some stated their resentment directly in newspaper and television interviews while others made it clear through their characters who depict the suffering average everyday American facing reality by illusion. Modern American theatre is rich with these examples. One can only read between the lines to realize the fallacy of the dream and this has been my favorite part.

Ph. D. from Faculty of Arts, English Department (Literature Major, Drama Specialization) with general grade "Excellent"
Thesis entitled "A STUDY OF METATHEATRE IN MUISCAL COMEDIES BASED ON LITERARY WORKS WITH SPECIAL REFERENCE TO MY FAIR LADY, THE PHANTOM OF THE OPERA AND KISS ME KATE"