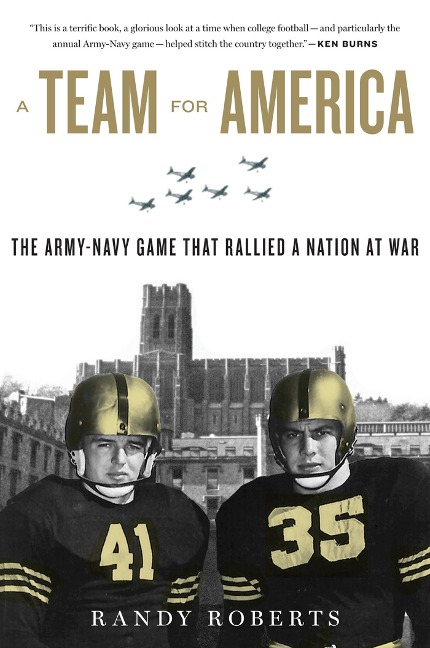 The Army-Navy Game That Rallied a Nation at War

A rousing celebration of a moment in history when college football  was more than metaphor and entertainment, it was a gritty sidebar to  real war.'  Robert Lipsyte, author of An Accidental SportswriterEach year the Army and Navy football teams meet for one epic game.  Across the nation, fans tune in to see who will emerge victorious. But  no game will ever match the one that was played on December 2, 1944.  America was in the midst of World War II: soldiers and sailors were  dying around the globe, and the home front suffered through shortages.  But for one day, all that was forgotten.Navy's team was ranked number two, Army's number one and on the verge of  becoming national champions. Everywhere, the war stopped as soldiers  listened to the broadcast. Randy Roberts has interviewed the surviving  players and coaches, bringing their stories to life. For three years,  military upperclassmen graduated and joined the fight. For three hours,  their alma mater gave them back one unforgettable performance.';The story of Army's celebrated 1944 national championship team is a  fascinating one, and its victory over Navy that year is remembered as  one of college football's greatest games. But Randy Roberts's A Team for America  tells an even greater story. It is a story of our country. Of a time  when college football  and this remarkable Army team  helped rekindle  hope and confidence throughout the land.'  Brigadier General Peter M.  Dawkins, U.S. Army (Ret.), 1958 Heisman Trophy winner, West PointRoberts brings a historian's thoroughness to the subject . . . A  fascinating time in American collegiate sports history.  Kirkus  Reviews

RANDY ROBERTS is a Distinguished Professor of History at Purdue University. His previous books include John Wayne: American (coauthored with James Olson), Joe Louis: Hard Times Man, and Papa Jack: Jack Johnson and the Era of White Hopes,among others.