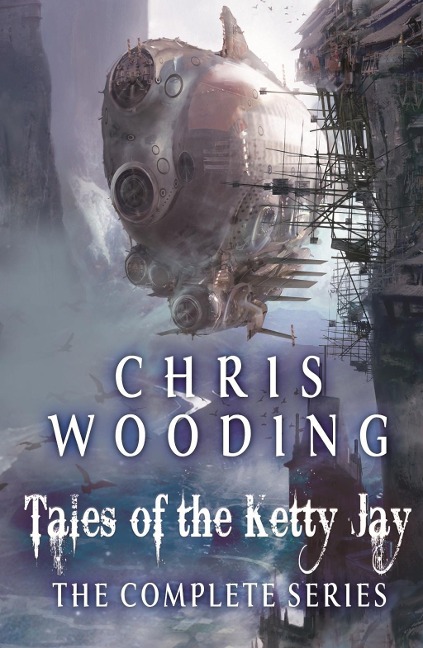 Tales of the Ketty Jay

Retribution Falls, The Black Lung Captain, The Iron Jackal, The Ace of Skulls

Frey is the captain of the Ketty Jay, leader of a small, highly dysfunctional band of layabouts. An inveterate womaniser and rogue, he and his gang make a living on the wrong side of the law, avoiding the heavily armed flying frigates of the Coalition Navy. With their trio of ragged fighter craft they run contraband, rob airships and generally make a nuisance of themselves.

In Retribution Falls, a hot tip on a cargo freighter loaded with valuables seems like a great prospect for an easy heist and a fast buck. Until the heist goes wrong, and the freighter explodes. Suddenly Frey isn't just a nuisance anymore - he's public enemy number one, with the Coalition Navy on his tail and contractors hired to take him down.

Times are tough for the crew in The Black Lung Captain, Enter Captain Grist. He's heard about a crashed aircraft laden with the treasures of a lost civilisation, and he needs Frey's help to get it. There's only one problem. The craft is lying in the trackless heart of a remote island, populated by giant beasts and subhuman monsters.

The Iron Jackal takes them deep into the desert heart of Samarla, the land of their ancient enemies. To a place where the secrets of the past lie in wait for the unwary. Secrets that might very well cost Frey everything.

The Ace of Skulls: the last stand of the Ketty Jay. They've been shot down, set up, double-crossed and ripped off. They've stolen priceless treasures, destroyed a ten-thousand-year-old Azryx city and sort-of-accidentally blew up the son of the Archduke. Now they've gone and started a civil war. This time, they're really in trouble.

Yoga of the Subtle Body