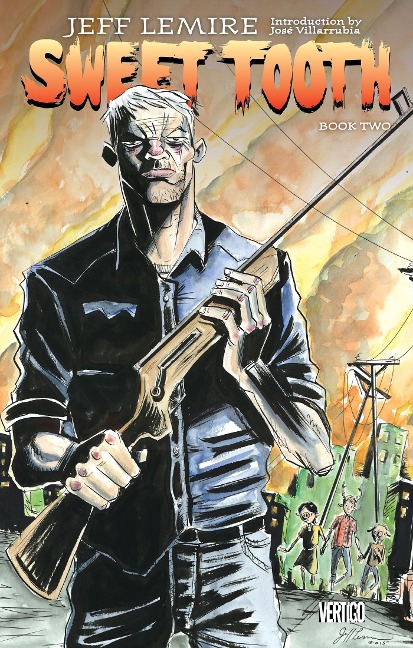 The human race has reached its darkest hour. In the seven years since the Affliction first appeared, billions have died. All the children born since the plague are a strange new race of animal-human hybrids.

One of the few remaining humans, a drifter named Jepperd, has formed a bond with one such child, a sweet, deer-like boy called Gus. But even among the hybrid children, Gus is an anomaly, seemingly born before the sickness began.

Believing that Gus' history might be the key to the plague's origins, Jepperd and the boy will journey north together to Alaska in the hope that if they can uncover the story of his birth, it will lead them to a cure for the sickness.

But the troubling question remains: If Gus isn't a product of the Affliction, was he its cause?

Written and illustrated by Jeff Lemire (Descender, Green Arrow), Sweet Tooth is an exploration of kindness and cruelty in a dangerous post-apocalyptic world. Sweet Tooth Book Two collects issues #13-25, a pinup gallery from some of the comics industry's top talents and an introduction by colorist José Villarrubia.

Award-winning Canadian cartoonist Jeff Lemire is the creator of the acclaimed monthly comic book series Sweet Tooth published by DC/Vertigo and the award-winning graphic novel Essex County published by Top Shelf. He also writes Animal Man, Frankenstein Agent of S.H.A.D.E., and Superboy for DC Comics. In 2008 Jeff won the Shuster Award for Best Canadian Cartoonist and the Doug Wright Award for Best Emerging Talent. He also won the American Library Association's prestigious Alex Award, recognizing books for adults with specific teen appeal. In 2010 Essex County was named as one of the five Essential Canadian Novels of the Decade. In 2013 Lemire published the graphic novel The Underwater Welder. He currently lives and works in Toronto with his wife and son.