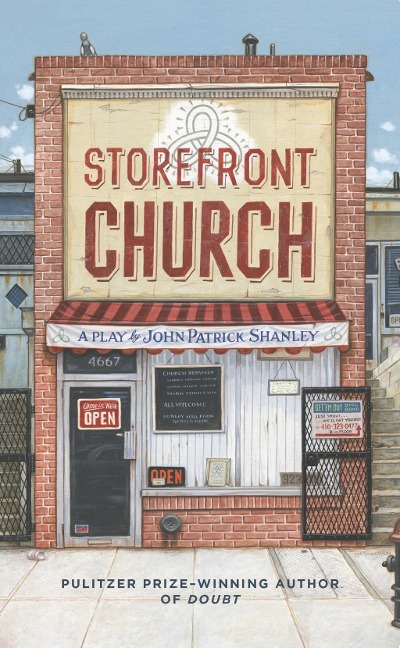 "Some of Shanley's sharpest comic writing in years... His intense engagement with questions of religion and ethics remains distinctive and invigorating.” - Charles Isherwood, New York Times

"There's a deeper philosophical vein that the author mines, allowing his language to acquire the heft and timbre of a serious moral debate...We taste bitterness, but also much that is sweet.” - David Cote, TimeOut New York

Concluding the "Church and State” trilogy of plays that began with Doubt and Defiance, Storefront Church tells the story of a Bronx Borough President who is forced by the mortgage crisis into a confrontation with a local minister. Blending earthy humor and philosophical reflection, this compassionate morality tale is an exploration of the often thorny relationship between spiritual experience and social action.

John Patrick Shanley is the author of Doubt: A Parable (Pulitzer Prize for Drama, Tony Award for Best Play), Outside Mullingar (Tony nomination for Best Play), Defiance, Danny and the Deep Blue Sea and Dirty Story, among many other plays. He wrote the teleplay for Live from Baghdad (Emmy nomination for Outstanding Writing of a Miniseries, Movie or Dramatic Special) and the screenplays for Congo, Alive, Five Corners, Joe Versus the Volcano, Doubt (Academy Award nomination for Best Adapted Screenplay) and Moonstruck (Academy Award for Best Original Screenplay).
E-Book 09/2014

JOHN PATRICK SHANLEY is from the Bronx. His plays include Danny and the Deep Blue Sea, Savage in Limbo, the dreamer examines his pillow, Four Dogs and a Bone, Beggars in the House of Plenty and Dirty Story. His trilogy Church and State began with Doubt, continued with Defiance, and now concludes with Storefront Church. For his play Doubt, Mr. Shanley received both the Tony Award and the Pulitzer Prize. In the arena of film, he has nine films to his credit, most recently Doubt with Meryl Streep, Philip Seymour Hoffman, Amy Adams and Viola Davis. Doubt, which he also directed, was nominated for five Academy Awards including Best Adapted Screenplay. Other films include Five Corners (Special Jury Prize, Barcelona Film Festival), Alive, Joe Versus The Volcano (which he also directed) and "Live From Baghdad” for HBO (Emmy nomination). For his script of Moonstruck, he received both the Writers Guild Award and the Academy Award for Best Original Screenplay. The Writers Guild of America awarded Mr. Shanley the 2009 Lifetime Achievement Award in Writing.