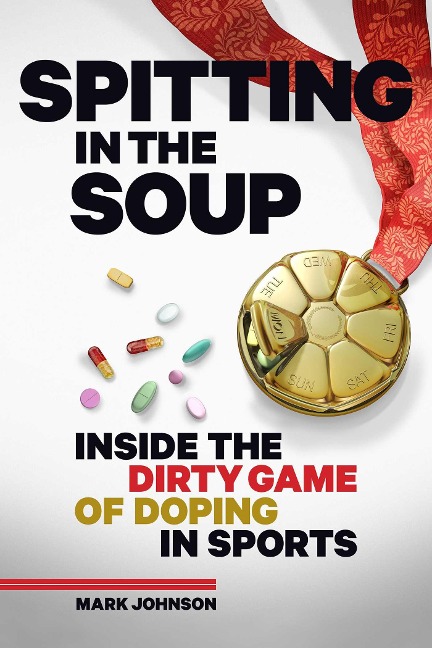 Spitting in the Soup

Inside the Dirty Game of Doping in Sports

Doping in sports is a history of good versus bad. Or so the story goes.

Truth is, athletes have doped to do their jobs since the dawn of organized sports. But cleaning up drug-soaked sports has been a mission at odds with the spectacle-hungry interests of advertisers, Olympic organizers, governments, reporters, and fans, none of whom want to spit into sports' nourishing broth of money, power, and national pride.

In Spitting in the Soup, Mark Johnson traces the shocking trail of hypocrisy that belies the tidy myth of clean athletes fighting corrupt deviants. Journalists spin false claims about amphetamines and EPO. Cold War governments treat anti-doping as an inconvenience. Olympic organizers dismiss the pursuit of clean sports as a budgetbreaking nuisance. And U.S. lawmakers tie themselves in knots to enrich snake-oil supplement makers while railing against performance-enhancing drugs as a stain on the American Way.

Spitting in the Soup is an eye-opening tour through the ethical, social, and economic clamor that arises from our ongoing efforts to create a sporting island of chemical purity in the midst of a drug-dependent world.

Mark Johnson is a sportswriter and sports photographer. He has covered cycling and endurance sports as a writer and photographer since the 1980s. His work often focuses on the business of pro cyclinga topic that frequently intersects with the sports long history of doping. Along with U.S. publications like VeloNews and Road, his work is published in Cycling Weekly in the UK, Velo in France, Ride Cycling Review and CyclingNews in Australia as well as general-interest publications including the Wall Street Journal. VeloPress published Johnsons first book, Argyle Armada: Behind the Scenes of the Pro Cycling Life, for which Johnson was embedded for a year with the Garmin-Cervélo professional cycling team. A category II road cyclist, Mark has also bicycled across the United States twice and completed an Ironman triathlon. A graduate of the University of California, San Diego, the author also has an MA and PhD in English Literature from Boston University. His other passion is surfing, which he does frequently from the home he shares with his wife and two sons in Del Mar, California.

1 The Origins of Doping

3 The Fall of Coubertin's Ideal

6 The Birth of the World Anti-Doping Agency

7 Doping and the Cold War

9 The Reds Are Winning

17 Charlie Francis: Take It to Make It

19 If It's Inherited, Is It Cheating?

20 Moral Drift and the American Way

Epilogue: The Spirt of Sport