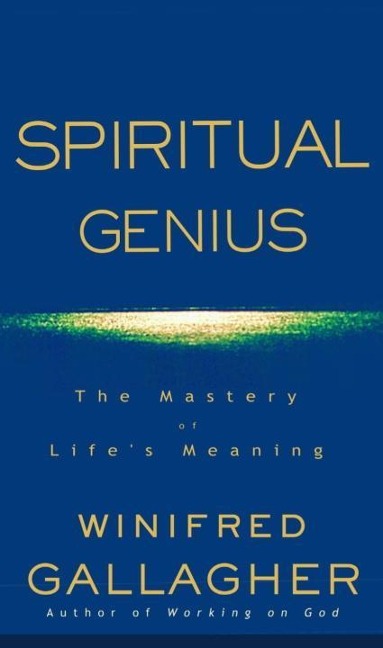 The Mastery of Life's Meaning

In Spiritual Genius, journalist Winifred Gallagher, the acclaimed author of Working on God, asks Rabbi Lawrence Kushner to define holiness. "Standing in the presence of God," he says. "Everyone has it, but some people seem to have more of a knack for accessing it." Like holiness, the gift that Gallagher calls "spiritual genius"--which she defines as "the uniquely human ability to search for and find life's meaning, then express it in our lives as only each of us can"--is one we all possess but don't necessarily recognize.

Whether they are called saints, gurus, tzaddiks, or shamans, there have always been people who possess exceptional insight, altruism, and charisma. In this disarmingly inspirational book, Gallagher investigates what ordinary people trying to live decent, meaningful lives can learn from such extraordinary men and women, who are specially attuned to the deepest truths, and who exemplify-and radiate-spiritual genius.

In a clear-eyed, ecumenical approach that's free of dogma and bias and suffused with profound           respect, Winifred Gallagher highlights the common wisdom-and down-to-earth good humor-of these religious leaders, revels in their differences, and identifies the capacity for spiritual genius that all of us share with them. On an island in the Arabian Sea, Gallagher visits Mata Amritanandamayi, regarded by devotees as a Hindu goddess, who transmits divine love through hugs and charities. She travels through America's inner cities with Tony Campolo, an Evangelical preacher who counsels national leaders and serves the poor. She learns how Riffat Hassan, a Pakistani theologian, uses the Qur'an to defend the rights of her Muslim sisters. She journeys to a Tibetan Buddhist monastery in the Himalayas to understand how an exiled minority has enchanted the world with their deep, resilient spirituality. In these diverse lives, Gallagher argues, we can glimpse our own potential for spiritual genius writ large. Each story testifies to the profound good in the world, even during a troubled time, and to Gallagher's groundbreaking theory of a human capacity for finding life's meaning that is nothing less than genius.

Winifred Gallagher is the author of The Power of Place, Just the Way You Are (a New York Times Notable Book), and, most recently, Working on God. She has also written for numerous journals,   including The Atlantic Monthly, Rolling Stone, and The New York Times. She lives in Manhattan and Long Eddy, New York.

A Madness Of Angels

What Does This Button Do?

The Strange Case of Rachel K