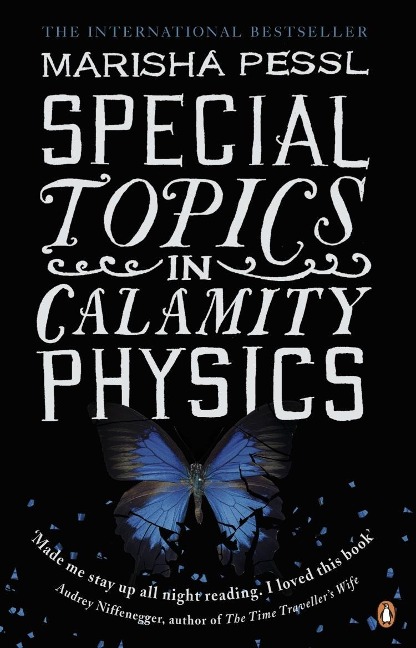 Marisha Pessl's Special Topics in Calamity Physics is an unforgettable debut novel that combines the storytelling gifts of Donna Tartt and the suspense of Alfred Hitchcock: a darkly hilarious coming-of-age tale and a richly plotted suspense story, told with dazzling intelligence and wit.

'I wrote this account one year after I'd found Hannah Dead.

I thought I'd managed to erase all traces of that night within myself.

But I was wrong.

Every night when I tried to sleep, I'd close my eyes and see her again, exactly as I found her, hanging from a pine tree by an orange electrical cord, her neck twisted like a tulip stem, her eyes seeing nothing.

Or else that was the problem. They'd seen everything.'

Special Topics in Calamity Physics is a mesmerizing debut.  As teenager Blue van Meer tells her story we are hurled into a dizzying world of murder and butterflies, womanizing and wandering, American McCulture, The Western Canon, political radicalism and juvenile crushisms.  Structured around a syllabus for a Great Works of Literature class (with hand-drawn Visual Aids), Blue's wickedly funny yet poignant tale reveals how the imagination finds meaning in the most bewildering times, the ways people of all ages strive for connection, and how the darkest of secrets can set us free.

'Beneath the foam of this exuberant debut is a dark, strong drink' Jonathan Franzen, author of, The Corrections

'Any [Donna] Tartt fan disappointed that her second novel had little in common with her debut should rush out and buy this book immediately... It's a brilliant debut, guaranteed to join the ranks of The Secret History and The Virgin Suicides as one of those rare books to become a cult hit and instant classic' Sunday Telegraph

'One of the most impressive debut novels I have ever read ... It stops you doing anything apart from reading it ' Independent on Sunday

'Special Topics in Calamity Physics made me stay up all night reading; in the morning it seemed like one of those parties where everyone is too cool for you but you desperately want to know them anyway . . . I loved this book' Audrey Niffenegger, author of The Time Traveler's Wife

Marisha Pessl was born in 1977 and lives in New York. This is her first novel.

The Murder at the Vicarage

The Science of James Bond