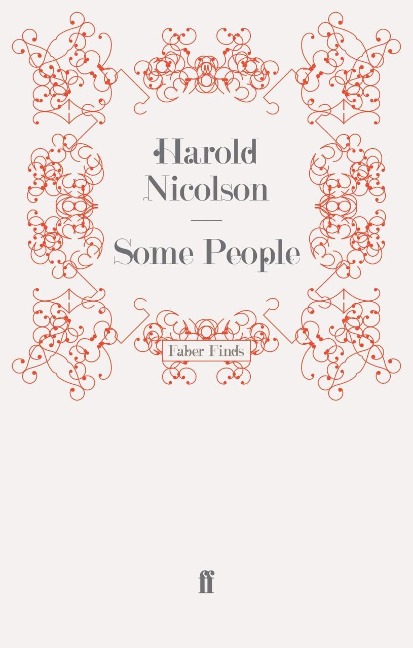 On the face of it, bracketing Harold Nicolson and Vladimir Nabokov seems unexpected but the latter paid a remarkable tribute to Some People. When speaking to Harold Nicolson's son, Nigel, he confessed that all his life he had been fighting against the influence of Some People.' The style of that book is like a drug', he said. The critic and biographer, Stacy Schiff, has also admitted 'Some People has exerted more influence than I care to admit. I would reread it any day of the week.'

Ever since first publication in 1927 it has been attracting this sort of praise. It is an unusual book comprising nine chapters each one being a sort of character sketch: Miss Plimsoll; J. D. Marstock; Lambert Orme; The Marquis de Chaumont; Jeanne de Henaut; Titty; Professor Malone; Arketall; Miriam Codd. The author himself writes, a little disingenuously, 'Many of the following sketches are purely imaginary. Such truths as they may contain are only half-truths.' In fact, it would be difficult to point to one, other than Miriam Codd, that was 'purely imaginary', some were composite portraits, others skilful amalgams of divers traits from a variety of different people, and others much more overtly drawn from one real-life figure, for example Lambert Orme clearly represents Ronald Firbank, and Arketall Lord Curzon's bibulous valet.

There is nothing else quite like Some People and in its own playful way is beyond category. To be tedious for a moment, we have to call it fiction but are then immediately thrown by Virginia Woolf's deft summary, 'He lies in wait for his own absurdities as artfully as theirs. Indeed by the end of the book we realize that the figure which has been most completely and most subtly displayed is that of the author . . . It is thus, he would seem to say, in the mirrors of our friends that we chiefly live.'

Fiction? Biography? Autobiography? - the category doesn't matter, the result is spellbinding however you choose to read it.