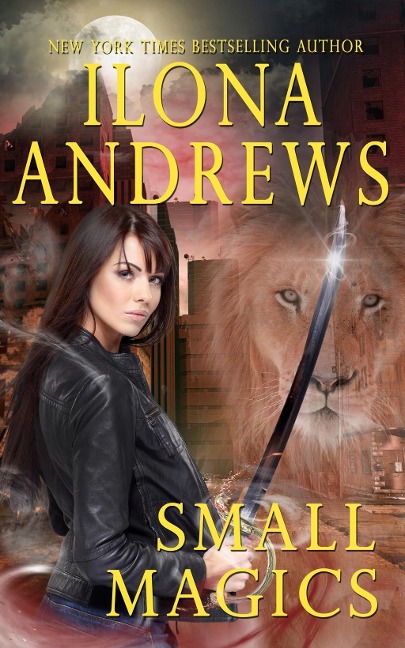 Now with four original illustrations and added material!An  irresistible compilation of five previously published stories by the bestselling author of the Kate Daniels series; including Kate's very first meeting with Saiman, some related adventures, two unforgettable 'outside' excursions, and new material from both Curran and Jim's point of view.A QUESTIONABLE CLIENTIn this 'intro' to the Kate Daniels world, we meet the extremely 'shifty' Saiman for the very first time, when Kate takes on the task of serving as his bodyguard to protect him from some very determined-and dangerous-Russian wizards. RETRIBUTION CLAUSESaiman's cousin, Adam-a frost giant and also an insurance adjuster-and his enigmatic partner, Siroun, set out on an impossible mission to enforce a client's Retribution Clause; that is, to kill the person who killed her.  But is their target even guilty? Magic and mayhem and a little personal chemistry will reveal the truth!OF SWINE AND ROSESA young adult story about a girl, a pig, some magic, and the worst date ever.Chad Thurman is a thug, who carries brass knuckles in both pockets and lays magic traps for intruders into &quote;his&quote; neighborhood. The last thing Alena Kornov wants to do is to go on the date with him. But when her family pressures her, she can't say no. Now the ice-cream is absent, the pig is running for its life, and we won't even mention the dead guy...GRACE OF SMALL MAGICSGrace has always known she wasn't like everyone else and that her family has magic abilities. After flying to meet the head of Clan Dreoch in order to fulfill her families' &quote;duties&quote; as servants, Grace finds herself in the middle of a mage clan warMAGIC TESTSA short story in the Kate Daniels universe. Kate recruits her teenage ward, Julie, to search out a missing student whose location spell has her hidden somewhere on campusCurran POVEverybody has a point of viewespecially Curran Lennart, Beast Lord of the Free People of Atlanta-and Kate Daniel's mate.  Here's what Curran was thinking while Kate was kicking butt and taking names from Magic Bites to Magic Bleeds.