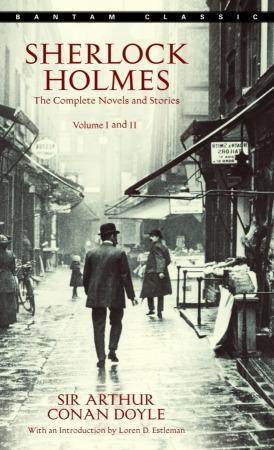 Sherlock Holmes: The Complete Novels and Stories: Volumes I and II

Since his first appearance in Beeton's Christmas Annual in 1887, Sir Arthur Conan   Doyle's Sherlock Holmes has been one of the most beloved fictional characters ever   created.  Now, in one eBook, Bantam Classics presents all fifty-six short   stories and four novels featuring Conan Doyle's classic hero-a truly complete collection   of Sherlock Holmes's adventures in crime!

Volume I includes the early novel A Study   in Scarlet, which introduced the eccentric genius of Sherlock Holmes to the world.    This baffling murder mystery, with the cryptic word Rache written in blood, first   brought Holmes together with Dr. John Watson.  Next, The Sign of Four presents Holmes's   famous "seven percent solution" and the strange puzzle of Mary Morstan in the quintessential   locked-room mystery.  Also included are Holmes's feats of extraordinary deception   in such famous cases as the chilling "The Adventure of the Speckled Band," the baffling   riddle of "The Musgrave Ritual," and the ingeniously plotted "The Five Orange Pips."

Volume II begins with The Hound of Baskervilles, a haunting novel of murder on   eerie Grimpen Moor, which has rightly earned its reputation as the finest murder   mystery ever written.  The Valley of Fear matches Holmes against his archenemy, the   master of imaginative crime, Professor Moriarty.  In addition, the loyal Dr. Watson   has faithfully recorded Holmes's feats of extraordinary detection in such famous   cases as the thrilling "The Adventure of the Red Circle," Holmes's tragic and fortunately   premature farewell in "The Final Problem," and the twelve baffling adventures from   The Case Book of Sherlock Holmes.

Conan Doyle's incomparable tales bring to life   a Victorian England of horse-drawn cabs, fogs, and the famous lodgings at 221 B Baker   Street, where for more than forty years Sherlock Holmes earned his undisputed reputation   as the greatest fictional detective of all time.

Sir Arthur Conan Doyle was born on May 22, 1859 in Edinburgh. He studied medicine at the University of Edinburgh and began to write stories while he was a student. Over his life he produced more than thirty books, 150 short stories, poems, plays and essays across a wide range of genres. His most famous creation is the detective Sherlock Holmes, who he introduced in his first novel A Study in Scarlet (1887). This was followed in 1889 by an historical novel, Micah Clarke. In 1893 Conan Doyle published 'The Final Problem' in which he killed off his famous detective so that he could turn his attention more towards historical fiction. However Holmes was so popular that Conan Doyle eventually relented and published The Hound of the Baskervilles in 1901. The events of the The Hound of the Baskervilles are set before those of 'The Final Problem' but in 1903 new Sherlock Holmes stories began to appear that revealed that the detective had not died after all. He was finally retired in 1927. Sir Arthur Conan Doyle died on July 7, 1930.

The Boy in the Dress