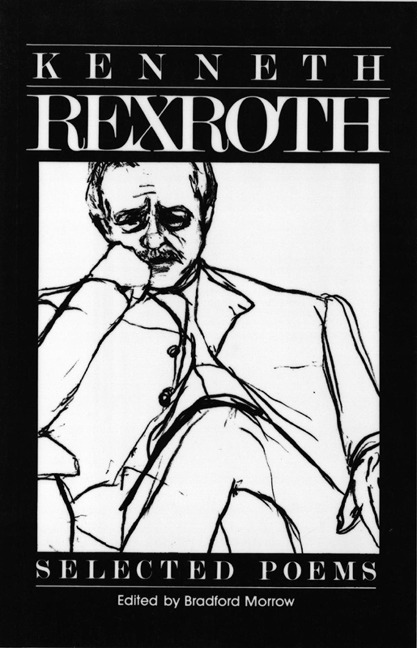 The late Kenneth Rexroth (1905-1982) is surely one of the most readable of this century's great American poets.

He is also one of the most sophisticated. Like William Carlos Williams, he honed his writing to a controlled and direct language. His intellectual complexity matches Wallace Stevens, his polymath erudition Ezra Pound. He is first among our nature poets. His love poems and erotic lyrics are unsurpassed. Rexroth's Selected Poems brings together in a single volume a representative sampling of sixty years' work. Here are substantial passages from his longer poems: The Homestead Called Damascus(1920-1925), begun while the poet was in his teens; the cubist Prolegomenon to a Theodicy (1925-1927); the philosophical masterpiece The Phoenix and the Tortoise (1940-1944) and The Dragon and the Unicorn (1944-1950); and the meditative The Heart's Garden, The Garden's Heart (1967). The shorter poems were originally gathered in In What Hour (1940), The Art of Wordly Wisdom (1949),The Signature of All Things (1950), In Defense of the Earth (1956), Natural Numbers(1964), New Poems (1974), and The Morning Star (1979).
E-Book 11/1984

Poet-essayist Kenneth Rexroth (1905-1982) was a high-school dropout, disillusioned ex-Communist, pacifist, anarchist, rock-climber, critic and translator, mentor, Catholic-Buddhist spiritualist and a prominent figure of San Francisco's Beat scene. He is regarded as a central figure of the San Francisco Renaissance and is among the first American poets to explore traditional Japanese forms such as the haiku.