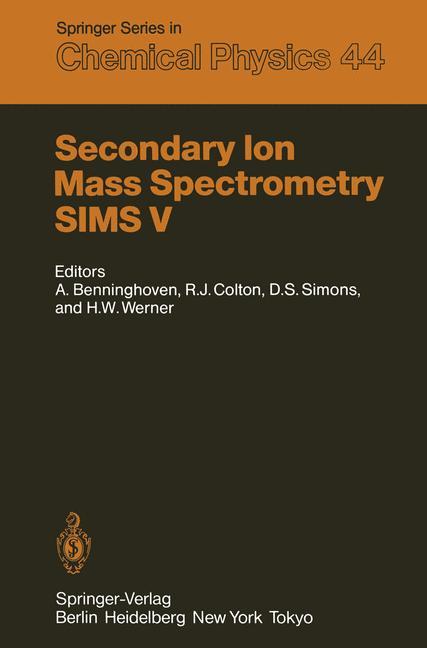 This volume contains the proceedings of the Fifth International Confer­ ence on Secondary Ion Mass Spectrometry (SIMS V), held at the Capitol Holiday Inn, Washington, DC, USA, from September 30 to October 4, 1985. The conference was the fifth in a series of conferences held bienni­ ally. Previous conferences were held in Miinster (1977), Stanford (1979), Budapest (1981), and Osaka (1983). SIMS V was organized by Dr. R. J. Colton of the Nayal Research Lab­ oratory and Dr. D. S. Simons of the National Bureau of Standards un­ der the auspices of the International Organizing Committee chaired by Prof. A. Benninghoven of the Universitat Miinster. Dr. Richard F. K. Herzog served as the honorary chairman of SIMS V. While Dr. Herzog is best known to the mass spectrometry community for his theoretical development of a mass spectrometer design, known as the Mattauch-Herzog geometry, he also made several early and impor­ tant contributions to SIMS. In 1949, Herzog and Viehbock published a description of the first instrument designed to study secondary ions pro­ duced by bombardment from a beam of ions generated in a source that was separated from the sample by a narrow tube. Later at the GCA Cor­ poration, he brought together a team of researchers including H. J. Liebl, F. G. Riidenauer, W. P. Poschenrieder and F. G. Satkiewicz, who designed and built, and carried out applied research with the first commercial ion microprobe.