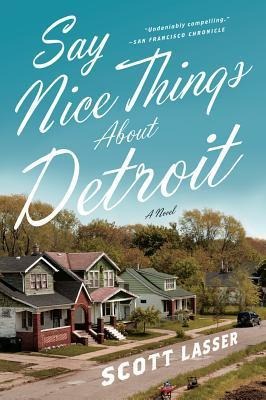 Twenty-five years after his high school graduation, David Halpert returns to a place that most people flee. But David is making his own escape-from his divorce and the death of his son. In Detroit, David learns about the double shooting of his high school girlfriend Natalie and her black half-brother, Dirk. As David becomes involved with Natalie's sister, he will discover that both he and his hometown have reasons to hope.

As compelling an urban portrait as The Wire and a touching love story, Say Nice Things About Detroit takes place in a racially polarized, economically collapsing city that doesn't seem like a place for rebirth. But as David tries to make sense of the mystery behind Natalie's death and puts back the pieces of his own life, he is forced to answer a simple question: if you want to go home again, what do you do if home is Detroit?

Scott Lasser, a native of Detroit, has worked for the National Steel Corporation and Lehman Brothers. He is the author of three novels and currently lives in Aspen, Colorado, and Los Angeles, California.