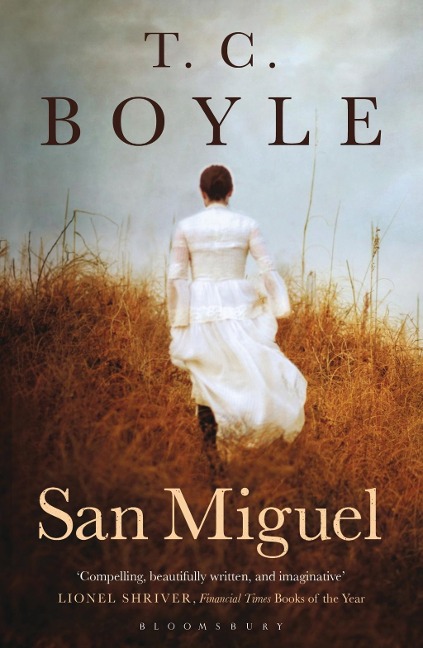 The schooner from Santa Barbara arrives at the tiny, desolate island on New Year's Day, 1888. As the trunks are unloaded onto the wet sand, thirty-eight-year-old Marantha Waters looks at the cliffs falling away into the churning sea. This is the first day of her new life on San Miguel.

Joined by her husband, a fiercely possessive Civil War veteran who will take over the operation of the sheep ranch on the island, Marantha strives to persevere in the face of brutal isolation. But the constant wind and sheep-ravaged wasteland shatter her illusions; her husband promised paradise. As he obsessively resolves to stay - and becomes increasingly distant from her and their adopted daughter Edith - Marantha's blighted lungs grow weaker in the dampness. Two years later, Edith, now a spirited teenager and an aspiring actress, will exploit every opportunity to escape the captivity her father has imposed on her.

March, 1930. Another family - and another bride - arrives on San Miguel. Elise Lester, a librarian from New York City, and her husband Herbie, a World War I veteran full of manic energy, achieve a celebrity of sorts as the news cameras take an interest in these wayward people living in the wild. But the unyielding island is haunted by its history. Will the family be able to cling together as the war threatens to pull everything apart?

San Miguel is a vivid and gripping story of hard lives pitched against the elements, the desires of stubborn men and the unbearable burden of love, from master American storyteller T. C. Boyle.

T. C. Boyle is the New York Times bestselling author of ten collections of stories and fourteen novels, most recently, San Miguel, followed by the second volume of his collected stories, T. C. Boyle Stories II. His work has been translated into twenty-five languages and won a PEN/Faulkner Award for Fiction. He is a member of the Academy of Arts and Letters and lives in California.