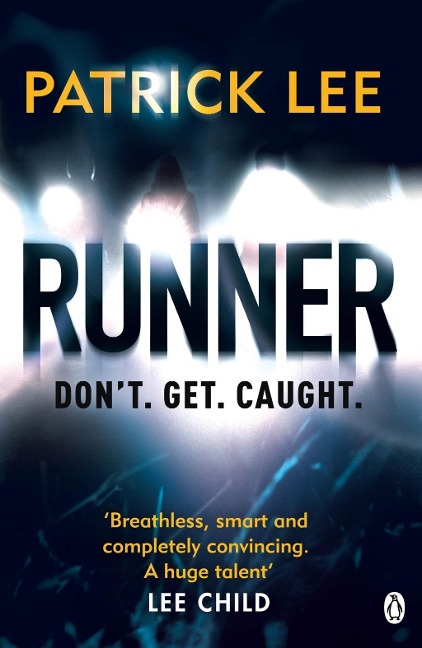 Sam Dryden was done being a hero.  But when, acting on instinct, he hides a terrified young girl from a group of well-armed pursuers, his fate is sealed.

Eleven-year-old Rachel can't remember much, but she knows she was imprisoned by the men trying to kill her. And that she is important to them.

In Dryden, though, Rachel has found the perfect protector.

An ex-soldier with the kind of elite military career he's not at liberty to talk about, Dryden's a man well versed in secrets, and driven to do what's right. But hunted and on the run, it's only as Rachel's memory returns that Dryden begins to fully appreciate the scale of the dangers they face. And then only one thing matters:

Introducing a fantastic new series character, ex-soldier Sam Dryden. Runner is an outstanding high-concept thriller that grips and entertains like your favourite Hollywood action movie. For those who love Lee Child, Simon Toyne and Dan Brown, Patrick Lee's rollercoaster of a thriller is not to be missed.

'Patrick Lee is a huge talent and Runner is his best book yet - breathless, involving, smart, and completely convincing' Lee Child

'Pure adrenaline rush . . . an action-packed novel brimming with complex  characters as well as genuine heart. Not to be missed' Lisa Gardner

'An amazing, high speed, hi-octane novel than moves faster than most people can read. Rarely is a story both plot driven and character driven, but Runner does this and more' Nelson DeMille

'I'm going to sue Patrick Lee for giving me whiplash: that's how furiously paced  this book is. A terrific cast of characters, unrelenting action - strap in and  enjoy the ride' Jesse Kellerman

Patrick Lee lives in Hudsonville, Michigan. He is the author of three previous novels: The Breach (a New York Times Bestseller), Ghost Country, and Deep Sky.

Opening the Door of Your Heart