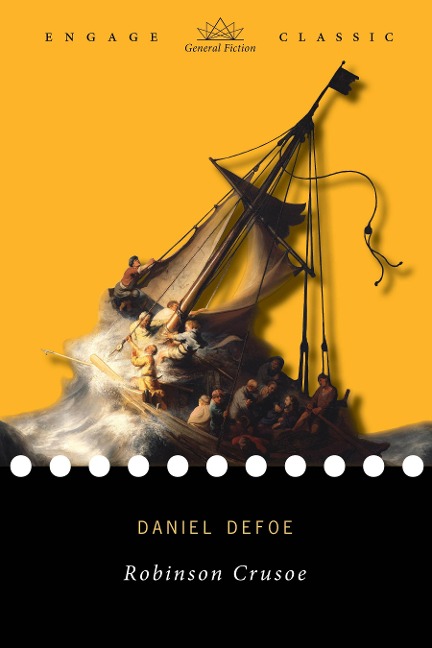 On Robinson Crusoe's first seafaring voyage, his ship sinks in a violent storm. On his second voyage he is enslaved by pirates. When Crusoe braves the ocean after several years in Brazil, Providence leaves him as the sole survivor of a shipwreck on a deserted island. Confronted by hunger and the elements, Crusoe builds a home, grows crops, tames wild animals, and survives cannibals and mutineers by his wits and the qualities of his cultural upbringing. But while Crusoe has conquered his island, he is affected most by his isolation from civilization.

Robinson Crusoe is widely regarded as the first English novel. No book in the history of Western literature had spawned more editions, spin-offs, and translations. Adaptations include The Swiss Family Robinson, the Hollywood film Cast Away, and nbc's tv series Crusoe. The story was likely influenced by the real-life Alexander Selkirk, a Scottish castaway in 1704 who spent four years and four months on the Pacific island Juan Fernández which was later changed to Robinson Crusoe Island in 1966.

Daniel Defoe (c. 1660 - 24 April 1731), born Daniel Foe, was an English trader, writer, journalist, pamphleteer and spy. He is most famous for his novel Robinson Crusoe, which is second only to the Bible in its number of translations. He has been seen as one of the earliest proponents of the English novel, and helped to popularise the form in Britain with others such as Aphra Behn and Samuel Richardson. Defoe wrote many political tracts and often was in trouble with the authorities, including a spell in prison. Intellectuals and political leaders paid attention to his fresh ideas and sometimes consulted with him.

Defoe was a prolific and versatile writer, producing more than three hundred works-books, pamphlets, and journals-on diverse topics, including politics, crime, religion, marriage, psychology, and the supernatural. He was also a pioneer of business journalism and economic journalism.

From 1719 to 1724, Defoe published the novels for which he is famous (see below). In the final decade of his life, he also wrote conduct manuals, including Religious Courtship (1722), The Complete English Tradesman (1726) and The New Family Instructor (1727). He published a number of books decrying the breakdown of the social order, such as The Great Law of Subordination Considered (1724) and Everybody's Business is Nobody's Business (1725) and works on the supernatural, like The Political History of the Devil (1726), A System of Magick (1727) and An Essay on the History and Reality of Apparitions (1727). His works on foreign travel and trade include A General History of Discoveries and Improvements (1727) and Atlas Maritimus and Commercialis (1728). Perhaps his greatest achievement with the novels is the magisterial A Tour Thro' the Whole Island of Great Britain (1724-27), which provided a panoramic survey of British trade on the eve of the Industrial Revolution.

Death of a Nag