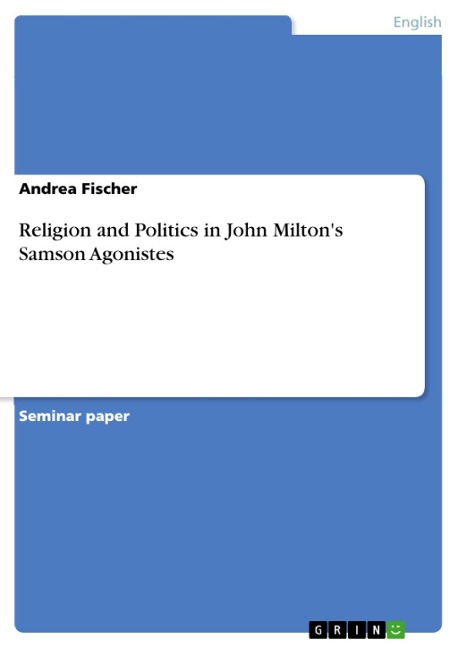 Seminar paper from the year 2001 in the subject English Language and Literature Studies - Literature, grade: 2.3 (B), University of Tubingen (New Philology Faculty), course: Hauptseminar: Restoration Literature, language: English, abstract: Milton is one of the greatest poets of the English language. His career as a poet was marked by private tragedies and public controversies. Samson Agonistes is a piece of work, which was composed by Milton not as a pure didactic exercise but also as extended personal meditation. It seems to be one of his attempts to justify the ways of God to himself and thereby establish a vision of Christian heroism that answers the fears and misgivings of his own heart and mind. Samson Agonistes also shows Milton's struggle with politics after the defeat of the Good Old Cause in which he supported strongly. The events and emotions surrounding his composition Samson Agonistes had a great influence on this work.

Nobody knows exactly when Samson Agonistes was written but it is assumed that it was in a time where his own resurrection and salvation had begun and that he had taken Samson as a role model less numinous than Christ to express his inner feelings. Samson Agonistes is therefor more interesting as a religious, political and autobiographical play than as the classical, Greek tragedy or as the Christian comedy, as so many people have judged it.

In this term paper I will work out how much politics and religion have influenced Samson Agonistes and whether there are bibliographical correspondences between Milton and Samson.
[...]