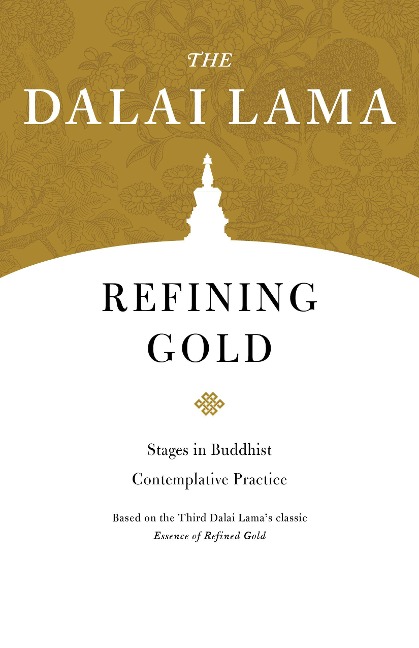 One of the latest additions to the Core Teachings of the Dalai Lama series, Refining Gold explains, in clear and direct language, foundational instructions for attaining enlightenment.

One of the most central set of teachings of the succession of Dalai Lamas since the fifteenth century is the Lam Rim, or Stages of the Path, teachings-in particular those written by the great Tsongkhapa. These teachings are a guide, from start to finish, on how to engage in the transformational Buddhist practices that lead to enlightenment.

In this illuminating work, His Holiness the Fourteenth Dalai Lama discusses a short but powerful text by his predecessor, the Third Dalai Lama Sonam Gyatso, who penned a famous commentary on the Lam Rim entitled Essence of Refined Gold. The Dalai Lama speaks directly to the reader-offering spiritual guidance, personal reflections, and scriptural commentary. His sincere approach and lucid style make Refining Gold one of the most accessible introductions to Tibetan Buddhism ever published.

This book was previously published under the title The Path to Enlightenment.

THE DALAI LAMA is considered the foremost Buddhist leader of our time. The exiled spiritual head of the Tibetan people, he is a Nobel Peace Laureate, a Congressional Gold Medal recipient, and a remarkable teacher and scholar who has authored over one hundred books.