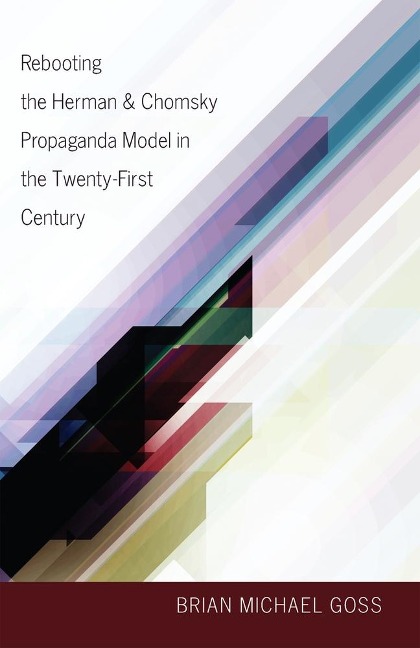 Rebooting the Herman & Chomsky Propaganda Model in the Twenty-First Century

Using the Herman & Chomsky «Propaganda Model» that was introduced in 1988, Goss offers a rigorous and accessible portrait of contemporary news media. Following a current survey of media ownership and news worker routines, in a series of case studies, he shows how recent news discourse has developed an Us/Them narrative. Cases include The New York Times' accounts of the Bush administration and United Nations in the lead-up to the 2003 invasion of Iraq; and analysis of the 2011 riots in the United Kingdom in a comparison between two British broadsheets (The Guardian and The Daily Telegraph). Further case studies demonstrate important, if partial, new media discontinuities with respect to «old» news media. The book's international reach and sustained attention to new media indicate that it is not simply high-fidelity repetition of Herman & Chomsky, but re-engineers the model's architecture for the twenty-first century.

Brian Michael Goss (PhD, University of Illinois at Urbana) is a professor in the communication faculty at Saint Louis University, Madrid, Spain. His principal research interests revolve around mass media in its many manifestations. Dr. Goss is the author of Global Auteurs: Politics in the Films of Almodóvar, von Trier, and Winterbottom (Peter Lang, 2009) and co-editor (with Christopher Chávez) of Identity: Beyond Tradition and McWorld Neo-Liberalism (2013).