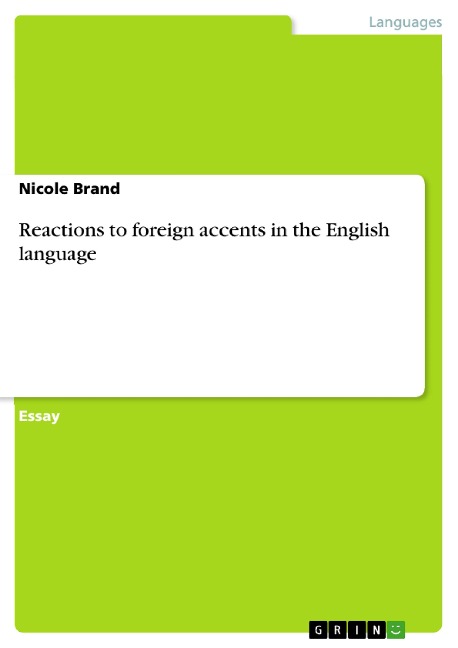 Reactions to foreign accents in the English language

Essay from the year 2005 in the subject Speech Science / Linguistics, grade: Class 2.1 (66%), University of East London, 7 entries in the bibliography, language: English, abstract: The study of foreign accents and their acceptance of native English speakers has become the favourite topic for this scale study. Therefore, the purpose is to find out if there are differences between the reactions of British and American English native-speakers towards foreign accents. An accent is linguistically known as "a method of pronouncing words common to a certain region. It can also refer to the stress on a certain syllable" (http://en.wikipedia.org/wiki/Accent, cited 11th November 2005). Consequently, a foreign accent in a different language is a method of pronouncing words common to the speaker's mother tongue. The British and American nationalities were chosen because they both have English as their first language. Thus, ten questionnaires were prepared which contain questions regarding the age, gender and nationality, whether the participants like or dislike foreign accents in general and their reactions to special foreign accents. Altogether, five British and five Americans of similar age and of equal distribution in terms of gender were asked to complete the questionnaire. The German, French and Indian accents were chosen because all three are very different regarding their intonation, rhythm and pronouncement and can therefore easily be differentiated.
Hence, the remainder of this scale study is divided into four sections, the procedure and the reasons behind the structure of the questionnaire, the results of British and Americans respondents including a comparison and analysis of the results, a discussion of the findings in relation to former research and finally, the conclusion.