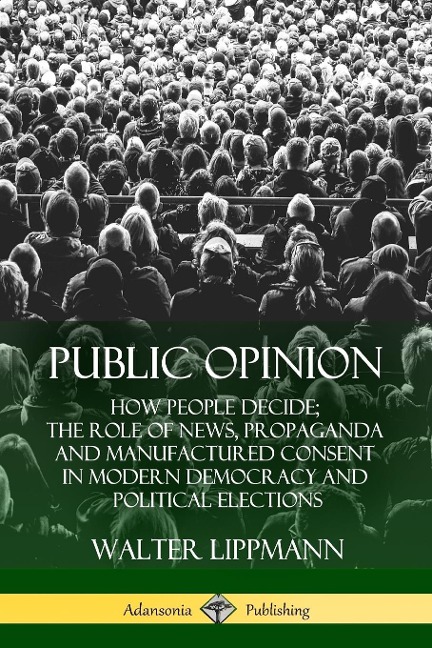 How People Decide; The Role of News, Propaganda and Manufactured Consent in Modern Democracy and Political Elections

Public Opinion is Walter Lippmann's groundbreaking work which demonstrates how individual beliefs are swayed by stereotypes, the mass media, and political propaganda.

The book opens with the notion that democracy in the age of super fast communications is obsolete. He analyses the impact of several phenomena, such as the radio and newspapers, to support his criticisms of the sociopolitical situation as it stands. He famously coins the term 'manufactured consent', for the fomenting of views which ultimately work against the interests of those who hold them.

Lippmann contends that owing to the masses of information flung at the population on a daily basis, opinions regarding entire groups in society are being reduced to simple stereotypes. The actual complexity and nuance of life, Lippmann contends, is undermined by the ever-faster modes of communication appearing regularly. News by nature presents or emphasizes only some of the facts.

The Madness of Crowds