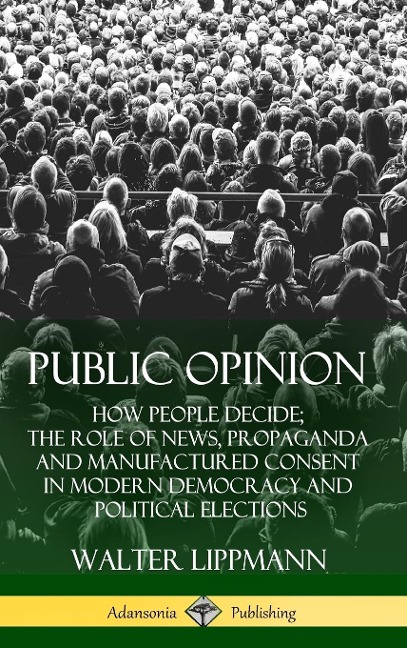 How People Decide; The Role of News, Propaganda and Manufactured Consent in Modern Democracy and Political Elections (Hardcover)

Public Opinion is Walter Lippmann's groundbreaking work which demonstrates how individual beliefs are swayed by stereotypes, the mass media, and political propaganda.

The book opens with the notion that democracy in the age of super fast communications is obsolete. He analyses the impact of several phenomena, such as the radio and newspapers, to support his criticisms of the sociopolitical situation as it stands. He famously coins the term 'manufactured consent', for the fomenting of views which ultimately work against the interests of those who hold them.

Lippmann contends that owing to the masses of information flung at the population on a daily basis, opinions regarding entire groups in society are being reduced to simple stereotypes. The actual complexity and nuance of life, Lippmann contends, is undermined by the ever-faster modes of communication appearing regularly.

WALTER LIPPMANN (1889-1974) was an American newspaper commentator and author. After graduating from Harvard, he co-founded the influential liberal magazine The New Republic in 1913. In 1931, Lippmann started writing the column "Today and Tomorrow" in the New York Herald Tribune, which was syndicated in more than 250 newspapers worldwide and earned him one of his two Pulitzer Prizes. Throughout his long career, Lippmann was highly praised and known as the "Father of Modern Journalism."