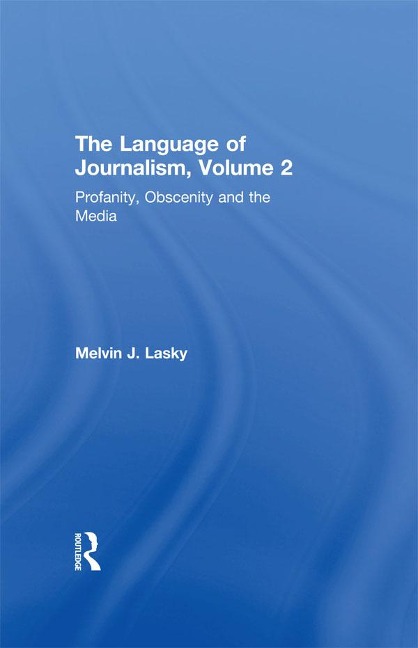 Profanity, Obscenity and the Media

This is the second volume of Melvin J. Lasky's The Language of Journalism series, praised as a "brilliant" and "original" study in communications and contemporary language, and as "a joy to read." When it was first published, it broke ground in focusing on the comparative styles and prejudices of mainstream American and British newspapers, and in its trenchant analysis of their systematic debasement of language in the face of obligatory platitudes and compulsory euphemisms.

Lasky documents the growing crisis affecting honest, thoughtful, and independent journalism in the Western world. He extends the scope of his first volume in the trilogy and deepens the interpretation. He also adds a personal touch of wit and anecdote, as one might expect from an experienced international journalist and historian. Lasky's examination of the use of formerly forbidden language is a triumph of sinuous semantics. In his incisive analysis, we see the tortuous struggle of a once Puritanized literary culture writhing to break free of censorship and self-censorship.

This volume on the phenomenon of profanity adds another dimension to Lasky's thesis on mass culture's trivialization of real social and political phenomena. It also underscores our society's embrace of banality, in standardizing politically correct jargon and slang. Readers of the first volume will find here a new range of references to illuminate the detail of what our newspapers have been publishing.

Part 1: Towards a Theory of Journalistic Malpractice
1. From A. N. Whitehead to Irving Kristol
Illusions and Self-Deception
Hard Facts and Soft Future
Adversarial Culture
"Sensations": From Silent Images to Talking Pictures
Art News and New Art
Of Nihilism and Mendacity
2. The Little Lie and the Big Story
Hitler's Hoax
The Counterfeiter's Fiction
Mysteries of the Piltdown Forgery
3. Difficulties in Grappling with Reality
The Reporter Rearranges the Scene
Janet Cooke and the Color of Truth
The Duping of Hersh's "Camelot"
Martin Walser's "Catechism of Correctness"
4. The New Shamanism

Part 3: Literary Origins and Popular Consequences
21. Sources of Malpractice
22. From Wordsworth to Orwell and Hemingway
23. The Prose We Write and Speak
24. Dealing with the Grandmother Tongue
The Continuing Domestication of Yiddishisms
Leo Rosten's Gallimaufry
25. Quotations that were Unquoted
26. Dirty Realism in the White House and Beyond
27. Towards a Vocabulary of Pop Diplomacy