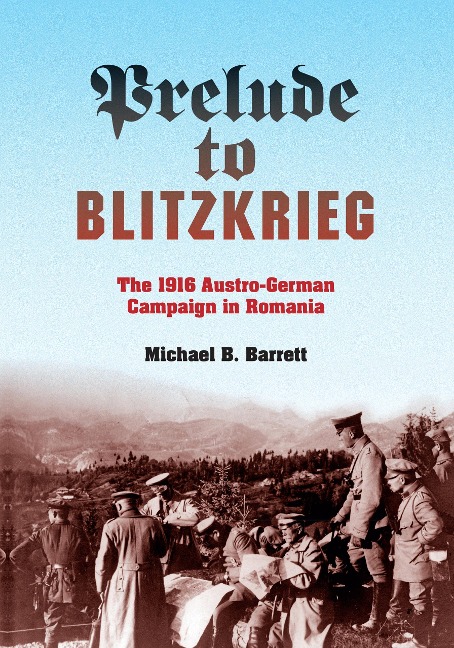 The 1916 Austro-German Campaign in Romania

In contrast to the trench-war deadlock on the Western Front, combat in Romania and Transylvania in 1916 foreshadowed the lightning warfare of World War II. When Romania joined the Allies and invaded Transylvania without warning, the Germans responded by unleashing a campaign of bold, rapid infantry movements, with cavalry providing cover or pursuing the crushed foe. Hitting where least expected and advancing before the Romanians could reacteven bombing their capital from a Zeppelin soon after war was declaredthe Germans and Austrians poured over the formidable Transylvanian Alps onto the plains of Walachia, rolling up the Romanian army from west to east, and driving the shattered remnants into Russia. Prelude to Blitzkrieg tells the story of this largely ignored campaign to determine why it did not devolve into the mud and misery of trench warfare, so ubiquitous elsewhere.

"This work will stand as the definitive study of the Central Powers part of the campaign for some time to come." -Journal of Military History

"Barnett's book is a valuable addition to the field. He writes well and with authority. He has been able to illuminate a little-known corner of the First World War and provide a state-of-the-art operational history combining detailed narrative with prescient analysis." -American Historical Review
E-Book 11/2018

List of Maps
Preface
List of Selected Abbreviations
1. Romania Enters the War
2. The Central Powers Respond
3. The First Dobrogea Campaign
4. Clearing Transylvania
5. The Second Dobrogea Campaign
6. Stalemate in the Mountains
7. Moldavia: The Forgotten Front
8. The Drive across Walachia
9. The Fall of Bucharest and the End of the 1916 Campaign
10. Conclusion
Notes
Bibliography
Index