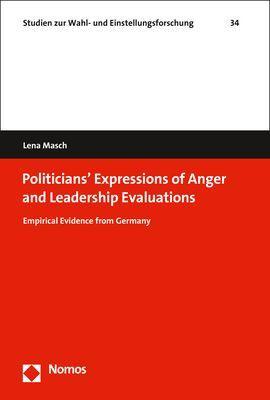 This book explores the impact of politicians' expressions of anger on viewers. Electoral candidates may alter their emotional behaviour strategically during election campaigns as a means of gaining voters' support. Hence, this study investigates empirically how expressions of anger affect leadership evaluations. An experiment was conducted to establish the impact of politicians' expressions of emotions on viewers. This study focuses on politicians as a social group, as well as three politicians in particular: Chancellor Angela Merkel; Gregor Gysi, the former parliamentary leader of the Left; and Sigmar Gabriel, the former party leader of the Social Democrats. These three case studies are well-suited to testing the effects of expressions of emotion by political leaders with varying positions in the political system.
Lena Masch is a postdoctoral researcher at the Department of Political Science at Heinrich Heine University Düsseldorf.