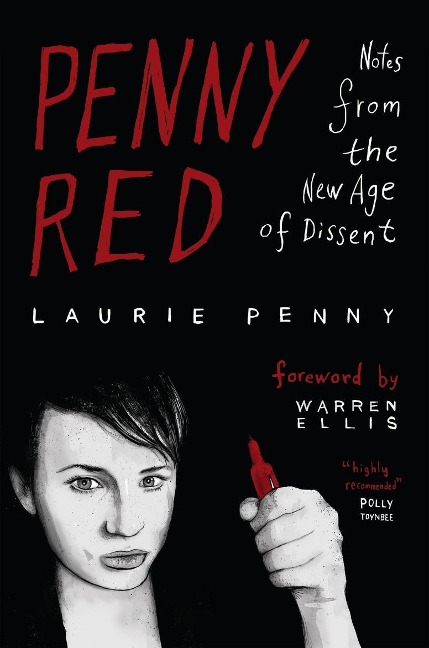 Notes from the New Age of Dissent

In the space of a year, Laurie Penny has become one of the most prominent voices of the new left. This book brings together her diverse writings, showing what it is to be young, angry and progressive in the face of an increasingly violent and oppressive UK government.

Penny Red: Notes from the New Age of Dissent collects Penny's writings on youth politics, resistance, feminism and culture. Her journalism is a unique blend of persuasive analysis, captivating interviews and first-hand accounts of political direct action. She was involved in all the key protests of 2010/2011, including the anti-fees demos in 2010 and the anti-cuts protests of spring 2011, often tweeting live from the scene of kettles and baton charges. An introduction and extensive footnotes allow Penny to connect all the strands of her work, showing the links between political activism and wider social and cultural issues.

This book is essential for understanding what motivates the new generation of activists, writers and thinkers that bring creativity, energy and urgency to the fight against capitalism and exploitation.

Laurie Penny is an award-winning author, columnist, journalist and screenwriter.

Her seven books include Bitch Doctrine (Bloomsbury 2017), Unspeakable Things (Bloomsbury 2014), Everything Belongs To The Future (Tor, 2016) and Penny Red (Pluto Press, 2011). As a freelance journalist, she writes essays, columns and longform features about politics, social justice, pop culture, feminism, mental health, technology for the Guardian, Longreads, Time Magazine, Buzzfeed, The New York Times, Vice, Salon, The Nation, The New Statesman, The New Inquiry, Tor.com and Medium. Her short stories have been published by Tor.com, Terraform and in collections for MacMillan and Nautilus Press. She was a 2014-15 Nieman Journalism Fellow at Harvard University.

As a screenwriter, Laurie has worked on The Nevers, (HBO), Netflix's The Haunting, and Amazon's Carnival Row'

I. This is Actually Happening

Inside the Millbank Tower Riots; Talking About a Revolution; Inside the Whitehall Kettle; Protesting the Turner Prize; Inside the Parliament Square Kettle; A Right Royal Poke; No Sex, No Drugs and No Leaders; What Really Happened in Trafalgar Square; Lies in London

Undercover With the Young Conservatives; Buns, Bunting and Retro-Imperialism; This is England; Poppy Day is the Opium of the People; Michael Gove and the Imperialists; The Power of the Intern; Strictly Come Scrounging?; Poverty Pimps: Selling Out the Disabled; A Tale of Three Parties; Simon Hughes and the Cartel of British Politics; The Social Mobility Scam

5. Their Hallucinations, Our Desires

Insurrection on Oxford Street; This is no Conspiracy; The Revolution Will Be Civilised; Revolts Don't Have to be Tweeted; Is that a Truncheon in Your Pocket?; One Man and His Tent; How the Disabled were Dehumanised; Hey, Dave: Our Society's Bigger Than Yours; In Defence of Squatting; Inside the Gaddafi House

Ain't I a Woman