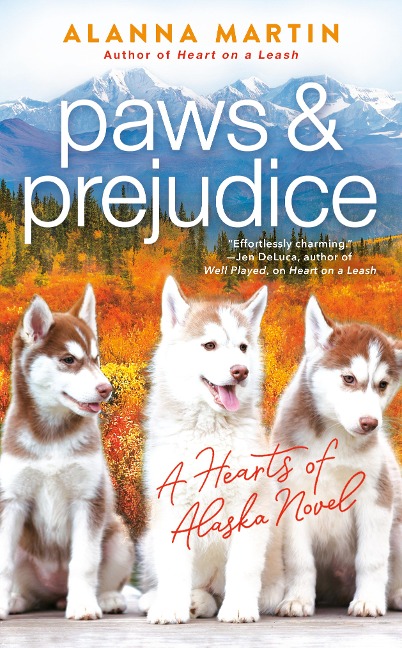 It's up to a trio of adorable rescue huskies to make two lonely hearts in a coastal Alaskan town realize that true love is worth too much to turn tail and run.

Glaciers have nothing on Kelsey Porter when she decides to freeze someone out. After getting burned once, she's not about to let it happen again. And right now all that icy contempt is focused on one annoyingly attractive and entitled interloper: Ian Roth. Not only is he looking to take advantage of her quaint, coastal community, tainting the small-town charm of Helen, Alaska, but he has committed the one crime she can never forgive--he doesn't like her dogs.

Unlike what Kelsey believes, Ian loves Helen's charms as much as she does. That's partly why he's determined to open a brewery there, and he's not about to let anything or anyone stop his dream from coming true. But he didn't count on the beautiful, prickly woman getting under his skin. Or having to be within hand-biting proximity of her three huge huskies.

When Kelsey's family conscripts her into helping Ian get his brewery off the ground, she finds herself caught between a rock and a hard . . . muscular . . . man who has a fear of dogs. But the longer they work together, the more she can feel herself begin to thaw. Now she'll have to choose: let sleeping dogs lie to protect her heart, or mush head-on toward love.

Growing up, Alanna Martin wanted to be an astronaut, a doctor, and an actor--possibly all at once. After nine years of studying psychology, she somehow became a writer instead. This turned out to be the best career choice of all because she can work in her pajamas while drinking wine. She firmly believes in the power of fluffy books, long walks in the woods, and that there's no such thing as too much coffee.

A History Of The Wife

The Mirror World of Melody Black

Between Past and Future