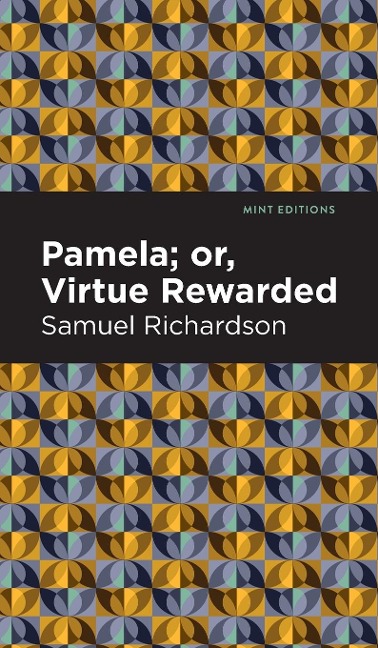 Pamela; or, Virtue Rewarded (1740) is a novel by English writer and printer Samuel Richardson. Recognized as the first English novel, Pamela; or, Virtue Rewarded is an epistolary novel that takes on the themes made popular in conduct literature, a genre dedicated to educating readers on social norms. An immediate bestseller, the novel was frequently read aloud in villages and at sermons, furthering its success and popularizing the form of the novel for other writers to imitate and adapt.
Pamela Andrews is a fifteen-year-old maidservant at an estate in Bedfordshire. When Lady B, her employer, dies, her son Mr. B takes an interest in the innocent young girl, quickly turning from generosity to outright attempts at seducing her. As Pamela rejects his advances, she considers returning home to live in poverty with her parents. When he catches wind of her plan, however, Mr. B accuses Pamela of having an affair, notifying her parents and leaving her with nowhere to go. Devastated, the young girl takes a position at Lincolnshire Estate, where she is abused by her employer Mrs. Jewkes. Suffering from frequent beatings and a prolonged period of confinement, Pamela secretly communicates with the chaplain Mr. Williams. Desperate to escape, but determined to stick to her morals, Pamela resists renewed advances from Mr. B, who continues his jealous pursuit. As the novel reaches its conclusion, Pamela is forced to confront her fear of moral transgression, while Mr. B is faced with the possibility of reforming his libertine ways.
With a beautifully designed cover and professionally typeset manuscript, this edition of Samuel Richardson's Pamela; or, Virtue Rewarded is a classic of English literature reimagined for modern readers.

Samuel Richardson (1689-1761) was an English writer and printer. Born the son of a carpenter, Richardson received a limited education before becoming a printer's apprentice. He established his own shop in 1719 and received his first major contract in 1723, printing a bi-weekly Jacobite newspaper which was soon censored. Having married in 1721, Richardson and his wife Martha Wilde suffered the loss of several sons before Martha succumbed to illness in 1732. Devastated, Richardson eventually remarried and focused on his career, earning a contract with the House of Commons in 1733 and hiring several apprentices to assist him at his shop. During this time, Richardson turned to fiction, publishing his first novel, Pamela; or, Virtue Rewarded in 1740, a work now considered the first modern novel. Throughout the remainder of his career, he published two more epistolary novels-Clarissa: Or the History of a Young Lady (1748) and The History of Sir Charles Grandison (1753)-while continuing his work as a prominent and successful printer. He published and befriended many of the leading writers of his time, including Daniel Defoe, Sarah Fielding, and Samuel Johnson.