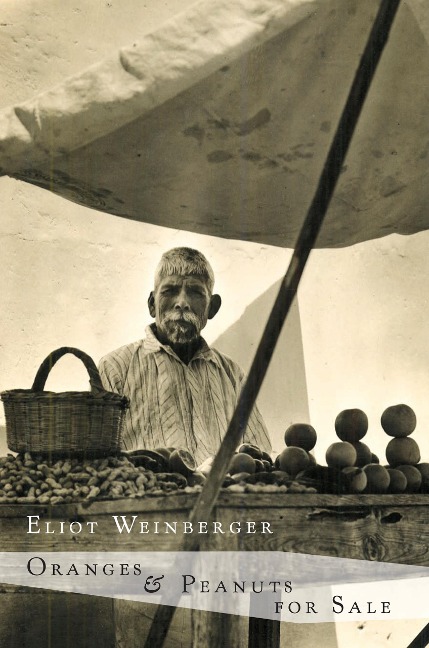 Presented at the PEN World Voices Festival as a "post-national” writer, Eliot Weinberger is "a sparkling essayist” (Confrontation), and his writings "a boundary-crossing, shape-shifting cabinet of curiosities” (The Bloomsbury Review).

Many of the twenty-eight essays in Oranges & Peanuts for Sale have appeared in translation in seventeen countries; some have never been published in English before. They include introductions for books of avant-garde poets; collaborations with visual artists, and articles for publications such as The New York Review of Books, The London Review of Books, and October.

One section focuses on writers and literary works: strange tales from classical and modern China; the Psalms in translation: a skeptical look at E. B. White's New York. Another section is a continuation of Weinberger's celebrated political articles collected in What Happened Here: Bush Chronicles (a finalist for the National Books Critics Circle Award), including a sequel to "What I Heard About Iraq,” which the Guardian called the only antiwar "classic” of the Iraq War. A new installment of his magnificent linked "serial essay,” An Elemental Thing, takes us on a journey down the Yangtze River during the Sung Dynasty.

The reader will also find the unlikely convergences between Samuel Beckett and Octavio Paz, photography and anthropology, and, of course, oranges and peanuts, as well as an encomium for Obama, a manifesto on translation, a brief appearance by Shiva, and reflections on the color blue, death, exoticism, Susan Sontag, and the arts and war.
E-Book 06/2009

The Theory of the Leisure Class