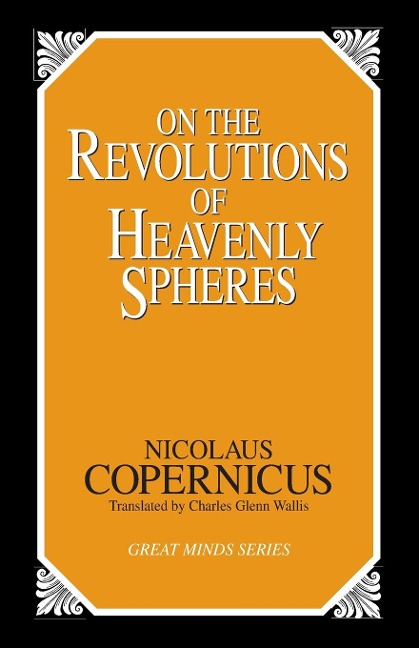 On the Revolutions of Heavenly Spheres

The Ptolemaic system of the universe, with the earth at the center, had held sway since antiquity as authoritative in philosophy, science, and church teaching. Following his observations of the heavenly bodies, Nicolaus Copernicus (1473-1543) abandoned the geocentric system for a heliocentric model, with the sun at the center. His remarkable work, On the Revolutions of Heavenly Spheres, stands as one of the greatest intellectual revolutions of all time, and profoundly influenced, among others, Galileo and Sir Isaac Newton.

NICOLAUS COPERNICUS was born, the youngest of four chil­dren, in Torun, Poland, on February 19, 1473. Following their father's death in 1484, the children were adopted by their uncle, Lukas Watzelrode, who later became bishop of Ermland. After attending the school at Torun, in 1491 Copernicus entered the University of Cracow, where he studied under Albert Brudzewski. From him Copernicus not only learned mathematics but became drawn to the new humanistic studies.

In 1496 Copernicus left Cracow for Italy, studying canon law, mathematics, and astronomy first at Bologna and later at Padua. After being appointed canon of the cathedral of Frauenburg in 1497, Copernicus immediately obtained a leave of absence to return to Padua to study medicine, taking his degree in 1499.

Following a lectureship in mathematics at Rome and doc­toral studies in canon law at Ferrara, Copernicus returned to Poland in 1506, first at Heilsberg as physician to his uncle, the bishop. Following his uncle's death in 1512, Copernicus took up residence as canonist at Frauenburg. Copernicus never took holy orders, taking only as many vows as were necessary for his duties as canonist: in this position he represented the cathedral chapter in the many disputes in which it was embroiled. He defended the chapter's rights and privileges during the war between Poland and the Teutonic Knights (1519-1521), and in 1522 he introduced a scheme for the reform of the currency before the Diet of Graudenz. Meanwhile Copernicus practiced as a physician, offering his medical services to the poor for free.

Despite his many duties as canonist and physician, Copernicus still found time for the study of astronomy. Continuing the astronomical observations begun in Italy, he sought, by a com­parative study of the ancients, to evolve from them a single sys­tem, at once simple and consistent. In 1530 Copernicus pro­vided a preliminary outline of his revolutionary heliocentric theory, with the sun at the center of the universe, in his Commentariolus. This work attracted great attention, and supporters prevailed on Copernicus to overcome his initial reluctance to introduce a new system of the universe which flew directly in the face of established dogma and tradition. The heliocentric theory was fully expounded in Copernicus's great work, De revolutionibus orbium coelestium (On the Revolutions of Heav­enly Spheres), published in 1543. Copernicus lived only long enough to see the book into print: in late 1542 he was stricken with dysentery, followed by a severe stroke which left him partly paralyzed. An advance copy of the Revolutions was brought to Copernicus at Frauenburg on the day he died, May 24, 1543.