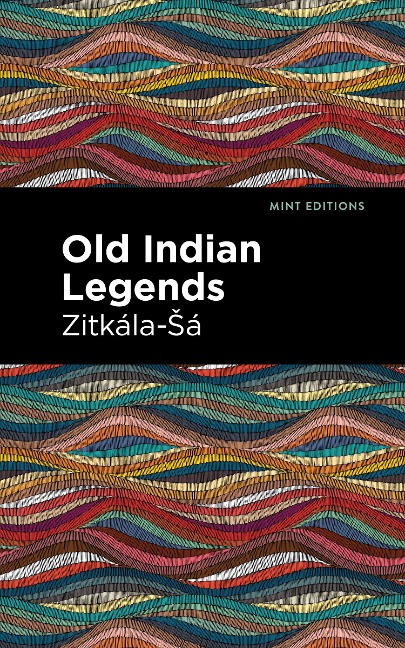 Old Indian Legends (1901) is a collection of traditional stories from Yankton Dakota writer Zitkála-sá. Published while Zitkála-sá was just beginning her career as an artist and activist, Old Indian Legends collects fourteen traditional legends and stories passed down through Sioux oral tradition. Intending to keep the stories or her people alive, Zitkála-sá popularized and protected these cultural treasures for generations to come.

In "Iktomi and the Ducks," spider-trickster spirit Iktomi befriends a group of ducks by playing them music to dance to. Gaining their trust, he sends them into a dancing frenzy causing them to break their necks, after which he takes them to his teepee to cook a meal. When a tree branch snaps outside, distracting Iktomi, a pack of wolves moves in for a feast of their own. In "Iktomi's Blanket," a starving Iktomi prays to Inyan for a blessing of food. Stumbling across a deer carcass, he believes his prayers have been answered and prepares a fire to roast the deer meat over. Feeling a chill, however, he goes to his teepee for a blanket, leaving the fire unattended. Throughout her collection, Zitkála-sá faithfully and respectfully retells the stories of her people. Old Indian Legends is a charming compilation from one of the leading American Indian writers of her generation, a committed activist and true voice for change who saw through her own eyes the lives and experiences of countless others.

With a beautifully designed cover and professionally typeset manuscript, this edition of Zitkála-sá's Old Indian Legends is a classic of American Indian literature reimagined for modern readers.

Zitkála-sá (1876-1938) was a Yankton Dakota writer, translator, musician, teacher, and activist. Born on the Yankton Indian Reservation in South Dakota, Zitkála-sá-also known as Gertrude Simmons Bonnin-was raised by her mother following their abandonment by her German American father. Zitkála-sá grew up on the reservation, but was taken by missionaries at the age of eight to the White's Indiana Manual Labor Institute, a Quaker school in Wabash, Indiana. There, Zitkála-sá was forced to suppress her heritage by cutting her hair and praying as a Quaker, but she also took advantage of the opportunity to learn reading and writing, as well as to play violin. She briefly returned to the reservation in 1887 before going back to Indiana to finish her education, after which she studied at Earlham College and played violin at the New England Conservatory of Music in Boston. After working from 1899 to 1901 as a music teacher at the notoriously abusive Carlisle Indian Industrial School in Pennsylvania, Zitkála-sá began to speak out against the program. In 1901, she wrote an article for Harper's Monthly chronicling a young boy's experience as a student at the school, where he felt forced to sacrifice his identity in order to assimilate. That same year, Zitkála-sá began collecting stories for Old Indian Legends, which recorded traditional stories she learned in her youth and from members of various tribes. Over the next several decades, she wrote several story collections, countless articles for Harper's Monthly and the Atlantic Monthly, and the libretto and songs for The Sun Dance Opera (1913). She also worked as an advocate and activist for the rights of women and American Indians, founding the National Council of American Indians with her husband and running grassroots policy and voter-registration campaigns around the country. She is remembered not only for her contributions to American Indian culture as a writer and translator, but for her tireless advocacy for resistance and reform that led to better education, healthcare, and legal standing for American Indians nationwide.