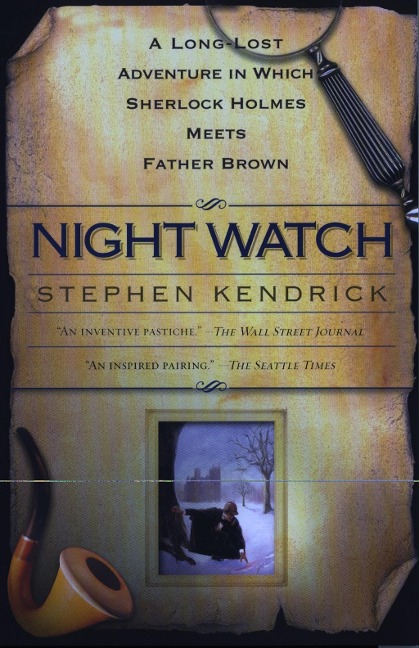 A Long Lost Adventure In Which Sherlock Holmes Meets FatherBrown

In this brilliantly crafted pastiche, Stephen Kendrick brings Sherlock Holmes and Father Brown together in an unprecedented collaboration on a singularly shocking murder case.

It is Christmas Day, 1902, and a priest's mutilated body has been found in a London church that is hosting a secret interfaith meeting to discuss the possibility of a Parliament of World Religions. A summons from the Prime Minister plunges Holmes into a case with international, political, and ecclesiastical complications. Untrampled snow surrounding the church suggests that the murderer remains within and that he is, presumably, one of the leaders of the world's great faiths.

Throughout the night, as more deaths are discovered, Holmes and Dr. Watson follow one false lead after another. But with his legendary astuteness, Holmes manages to wrap the case up in less than twenty-four hours—or so it seems. Two weeks later, Father Brown, the meek young priest-translator, pays a call at Baker Street to reveal "a few loose ends.”

The intersection of religion and politics, faith and sin, enmity and forgiveness—these themes are subtly interwoven into this fast-paced mystery that is filled with classic intrigue.

Stephen Kendrick is the author of Holy Clues: The Gospel According to Sherlock Holmes (available in paperback from Vintage Books). He is the minister of First and Second Church, Boston, and has previously served churches in Connecticut, Maryland, and Pennsylvania, as well as Unitarian chapels in the West Midlands of England. He has written for The Christian Century, The Hartford Courant, and the New York Times. He lives in Boston.