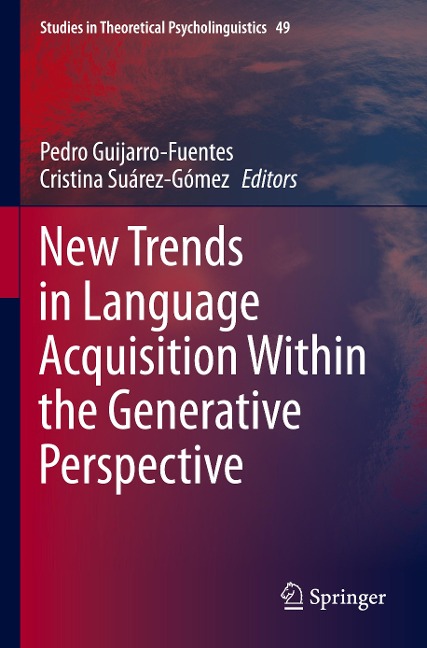 New Trends in Language Acquisition Within the Generative Perspective

This book presents a comprehensive, state-of-the-art treatment of the acquisition of Indo- and Non-Indo-European languages in various contexts, such as L1, L2, L3/Ln, bi/multilingual, heritage languages, pathology as well as language impairment, and sign language acquisition. The book explores a broad mix of methodologies and issues in contemporary research.
The text presents original research from several different perspectives, and provides a basis for dialogue between researchers working on diverse projects with the aim of furthering our understanding of how languages are acquired.  The book proposes and refines new theoretical constructs, e.g. regarding the complexity of linguistic features as a relevant factor forming children's, adults' and bilingual individuals' acquisition of morphological, syntactic, discursive, pragmatic, lexical and phonological structures.  It appeals to students, researchers, and professionals in the field.

Pedro Guijarro-Fuentes is a Professor of Spanish Linguistics at the University of the Balearic Islands and has headed numerous projects on the acquisition of various phenomena in the Spanish language including, but not limited to, the acquisition of ser/estar, tense and mood, and differential object marking, all funded by the British Academy, Art and Humanities Research Council, German Research Foundation, Spanish Ministry of Economy and Competitiveness, and more recently by the European Union Research Foundation under Horizon 2020. He has authored and co-authored numerous journal articles published in high-impact journal, as well as book chapters and books with leading international publishers.
Cristina Suárez-Gómez is a Senior Lecturer of English Linguistics at the University of the Balearic Islands and was the principal investigator of the project "Morphosyntactic variation in New Englishes". She is part of the research group ViEW (Variation in English Worldwide) and a contributor to the Gibraltar component of the International Corpus of English, funded by the Spanish Ministry of Economy and Competitiveness (FFI2014-53930-P). Holding a Ph.D. in English from the University of Santiago de Compostela (2004), her main areas of research are English historical syntax, English historical sociolinguistics, dialectal variation in English from both synchronic and diachronic perspectives, and morphosyntactic variation in World Englishes. Her principal publications can be seen at view0.webs.uvigo.es/team/cristinasuarez.