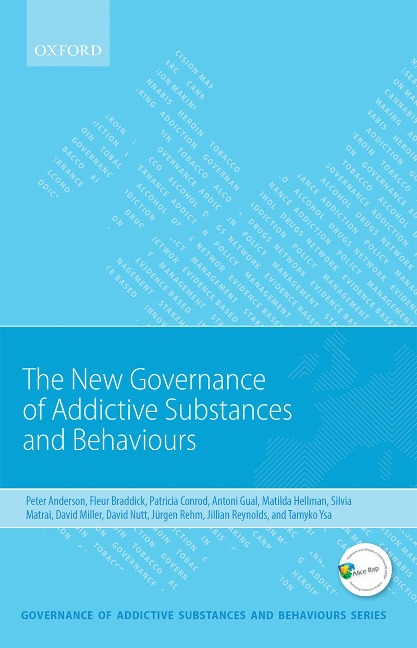 Addictions have increased markedly in contemporary societies over the past decades. As well as widely acknowledged issues surrounding illegal substance addictions, there are increasing numbers of problems related to behavioural addictions such as the use of legal substances such as antidepressants and amphetamines. These addictions are concerning for a range of public policy fields, not least, public health and social cohesion. As a result, cohesive governance of
addictive substances and behaviours is paramount to future public policy.

This book is based on the findings of a five year, multidisciplinary project (Addictions and Lifestyles in Contemporary Europe - Reframing Addictions Project) studying the pace and impact of addictions in Europe, and is the concluding volume in the Governance of Addictive Substances and Behaviours series. Authored by 11 leading figures in the fields of public health, psychology, sociology, psychiatry, addiction studies, epidemiology, and social and public policy, the book takes a truly
comprehensive approach to the study of the current state of addiction governance in Europe and proposals for a future governance framework.

No one country has yet got governance polices right. The project's outcome is a plan for the redesign of addictions governance, which includes amendments to key metrics used in research, promoting individual-level to society-level scope of understanding in policy approaches, and bringing the impact of dependency on societal well-being to the fore.

New Governance of Addictive Substances and Behaviours is an unprecedented study, both in terms of international reach and scope of issues addressed. It will be a key resource for anyone with an interest in research-driven European policy change in public health and the field of addictive substances and behaviours.

Peter Anderson is trained as a general practitioner and a specialist in public health medicine at Oxford University and the London School of Hygiene and Tropical Medicine. He is a member of the World Economic Forum's Global Agenda Council on Health and Well-being. From 1992 to 2000, he worked as the regional advisor for both tobacco and alcohol with the European Office of the World Health Organization and directed the Department of Health Promotion and Disease
Prevention. He has brought science to policy across a range of public health issues for several governments, intergovernmental organizations and public and private sector think tanks around the world. He has over 150 publications in international peer reviewed journals, is the author or editor of some 15
books and has published 12 monographs on addictions for the European Commission and the World Health Organization.

Fleur Braddick is a Human Scientist (biological and social sciences) and Medical Anthropologist by training and has worked in primary research and public health institutions in the areas of developmental psychology, psychopharmacology, mental health and substance use. She currently works as the Science Communication Officer of large international projects (such as ALICE RAP and LEADER) and as a technical consultant at the Catalan Department of Health on regional-level mental health promotion
and disorder prevention programmes in different settings. She has a keen interest in the ethics of public health policy, regulation and intervention and implementation.

Patricia Conrod is a Registered Clinical Psychologist with the Ordre des Psychologues du Québec, Full Professor in Psychiatry, Université de Montréal and Senior Visiting Lecturer in the Addictions Department, King's College London. She is based at the CHU Sainte-Justine Mother and Child Hospital Centre in Montreal and previously a Senior Clinical Lecturer in Addictions at King's College London.  Her research focuses on cognitive, personality and biological risk factors for the
development and maintenance of drug abuse and the factors that mediate the co-occurrence of addictive behaviours with other mental disorders.  Her experimental research focuses on factors that make people more susceptible to seek out behavioral reinforcement from drugs of abuse.  Her research findings have led to the
development of new approaches to substance abuse treatment and prevention that target personality risk factors and the underlying motivational determinants of drug use in subtypes of substance misusers.

Antoni Gual is a psychiatrist, with long experience in Addictions research, including both the clinical and the public health fields. He is head of the Addictions Unit at the Clinic Hospital of Barcelona, Spain; and also acts as Alcohol Consultant at the Health Department of Catalonia. He is coordinator of the ALICE RAP project (www.alicerap.eu) and is involved in several European research projects in the areas of Public Health and clinical trials. He is Vice-President of the International
Network on Brief Interventions for Alcohol Problems (INEBRIA), President of the European Federation of Addiction Scientific Societies (EUFAS) and past president of the Spanish Scientific Society for the Study of Alcohol and Alcoholism.

Matilda Hellman is an internationally recognized researcher of understandings of and societal reactions to transgressive and excessive problematic behaviour. Hellman has published extensively and held the lead in a series of international research projects since 2005. Hellman is vice director of the University of Helsinki Centre for Research on Addiction, Control and Governance (CEACG), and holds a university lectureship in sociology at the University of Tampere. Hellman has served as editor
for several books and scientific journals. She is currently the vice president of the Kettil Bruun Society for Social and Epidemiological Research on Alcohol. She works as a consultant for the Finnish National Institute for Welfare and Health (THL).

Silvia Matrai is a trained psychologist and cognitive-behavioural therapist (MSc), specialised in psychodiagnostics (MSc) and health care management (MSc) including health economics and public health policies. She has worked in clinical practice specialising in mental health in medical patients, psychosocial support at high-stress workplaces, and therapeutic communities and individual psychotherapy in addictions. She has been involved in clinical trials, public health research in addictions,
and as a researcher and international project manager in large-scale collaborative interdisciplinary research projects.

David Miller is Professor of Sociology at the University of Bath. He is interested in the effects of corporate and state power on policy and society more generally.  He conducts research on lobbying, think tanks, policy planning groups, how they are funded and with what effect. His interest in addictions focuses on how corporate interests attempt to manage the harms that their products cause.

David Nutt is a psychiatrist at Imperial College London. He trained at Cambridge, Guys Hospital, Oxford University and NIH. His research focuses on the use of PET and fMRI imaging to understand how drugs work in the brain and the mechanism underpinning psychiatric disorders, particularly addiction and anxiety disorders.

Jürgen Rehm, Ph.D., holds positions at the CAMH (Toronto, Canada) as Director of the Social and Epidemiological Research Department and Head of the PAHO WHO Collaborating Centre. In addition, he has been appointed the Inaugural Chair for Addiction Policy at the Dalla Lana School of Public Health of the University of Toronto, and section head for epidemiology at the Institute for Clinical Psychology and Psychotherapy of the Technical University Dresden (Germany). Dr. Rehm has published more
than 700 peer-reviewed journal articles in addiction research; he is listed among the ISI/Thompson Reuters globally most highly cited in the fields of social research and epidemiology (top 1% with respect to impact as measured by citations) and has been awarded the Jellinek Award, the most prestigious
award worldwide for alcohol research. He has served as consultant to many countries, and is member of the WHO Expert Advisory Panel of on Drug Dependence and Alcohol Problems.

Jillian Reynolds is a political scientist, holding a masters' degree in social and public policy from the Universitat Pompeu Fabra- The Johns Hopkins University. She has worked as a social and public policy researcher both in the public and private sectors, participating in projects focused on the core welfare policy areas: health and social protection, education, training and employment. She currently works as the Science Officer and researcher of the European-wide interdisciplinary projects
coordinated by the Addictions Unit of Hospital Clínic of Barcelona (such as ALICE RAP, AMPHORA or ODHIN), and has particular interest in the reduction of social and health inequalities through public health initiatives.

Dr. Tamyko Ysa, PhD in Political Science, Executive Master in Public Management, MSc in Public Administration and Public Policies (LSE), BA in Political Science, BA in Law. Associate Professor of the Department of Strategy and General Management and of the Institute for Public Governance and Management, and Vice-Dean for Research at ESADE Business School. She has published in journals such as "Journal of Public Administration Research and Theory", "International Public Management Journal",
"Journal of Business Ethics" or "Public Money & Management". Her previous books and chapters include "Governments and Corporate Social Responsibility: Public Policies beyond Regulation and Voluntary Compliance", "New Steering Concepts in Public Management" and "Governance of Addictions: European Public
Policies".