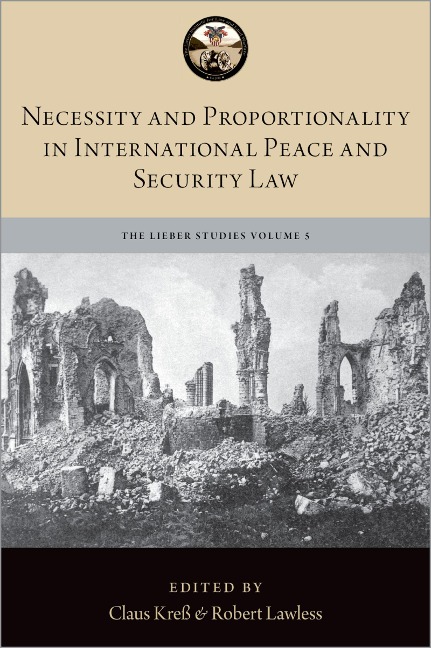 Necessity and Proportionality in International Peace and Security Law

Necessity and proportionality hold a firm place in the international law governing the use of force by states, as well as in the law of armed conflict. However, the precise contours of these two requirements are uncertain and controversial. The aim of Necessity and Proportionality in International Peace and Security Law is to explore how necessity and proportionality manifest themselves in the modern world under the law governing the use of force and the law of armed conflict, and how they relate to each other.

Claus Kreß is a Professor of International Law and Criminal Law. He holds the Chair for German and International Criminal Law and is the Director of the Institute of International Peace and Security Law at the University of Cologne. His prior practice was in the German Federal Ministry of Justice on matters of criminal law and international law. In addition to his scholarly work, comprising more than 150 publications on the law on the use of force, the law of armed conflicts and international criminal law, he has been a member of Germany's delegations in the negotiations regarding the International Criminal Court since 1998. He is a Life Member of Clare Hall College at the University of Cambridge, a Member of the Academy of Sciences and Arts of Northrhine-Westfalia, and the recipient of the 2014 M.C. Bassiouni Justice Award. He holds honorary doctorates from the State University Tbilisi and the University of Huánuco.

Robert Lawless is a Judge Advocate in the United States Army Judge Advocate General's Corps. He has been assigned as both a prosecutor and defense counsel, litigating military justice cases in courts-martial. He also served as an administrative and operational law attorney for the Third Infantry Division during Operation Resolute Support in Afghanistan. His assignments also include serving as an Assistant Professor in the Department of Law at the United States Military Academy, West Point, New York.

PART ONE: An Encounter of International Law with Morality
1. Necessity and Proportionality in Morality and Law
Jeff McMahan

PART TWO: Considerations of Overarching Significance
2. On the Continuous and Concurrent Application of ad Bellum and in Bello Proportionality
Eliav Lieblich

PART THREE: The International Law Governing the Use of Force
3. The Essential Link Between Proportionality and Necessity in the Exercise of Self-Defense
Geoffrey S. Corn

4. The Unwilling and Unable Test for Extraterritorial Defensive Force: Why Force Is Permitted Against the Territorial State
Jens David Ohlin

5. Drones Programs, the Individualization of War, and the ad Bellum Principle of Proportionality
Rebecca Mignot-Mahdavi

PART FOUR: The International Law of Armed Conflicts
8. Sequences in Military Necessity for the Jus in Bello
Dino Kritsiotis

11. Specifying the Proportionality Test and the Standard of Due Precaution: Problems of Prognostic Assessment in Determining the Meaning of "May Be Expected" and "Anticipated"
Stefan Oeter