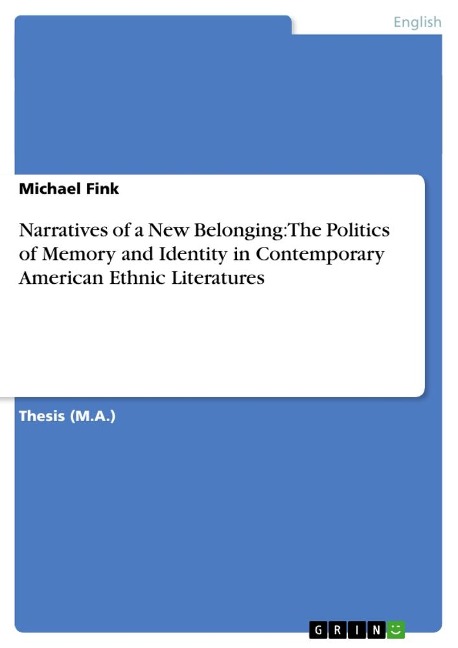 Narratives of a New Belonging: The Politics of Memory and Identity in Contemporary American Ethnic Literatures

Thesis (M.A.) from the year 2004 in the subject American Studies - Literature, grade: 1,6 (A), University of Regensburg (Insitute for American Studies), language: English, abstract: 1. 'Narratives of a New Belonging' - Introduction and Aim of the Study
In March 1968 Robert Kennedy reported the following about the miserable living conditions on most Native American reservations to a Senate sub-committee: "The first Americans are still the last Americans in terms of income, employment, health and education. I believe this to be a national tragedy for all Americans, for we all are in some way responsible" (qtd. in Breidlid 1998: 6).

Opening this thesis with this rhetoric pun on the first and the last on the American continent has been a deliberate decision as Kennedy's status quo report provides for a nice introduction to this thesis' larger subject matter. When his dialogics of the first and the last are not only restricted to U.S. American Indian communities, the overall image evoked can in fact easily be applied to other U.S. ethnic groups as well. Having long settled the desert regions north of nowadays U.S. Mexican border, contemporary Hispanic Americans, for instance, as the descendents of an early mestizo population of Mexican-Indian, European-Spanish and Anglo-American ancestry, share a collective memory which far precedes the U.S. presence in North America. Likewise African Americans can provide for a historical legacy that through the Diaspora of the Middle Passage and the system of plantation slavery easily traces itself back to the very first beginnings of American civilization. When in recent years many other immigrant and minority groups have handed in similar claims, the overall picture of American history evoked is no longer one of a WASP unitarian sense of historiography, but of transcultural diversity and plurality which clearly contradicts the proclaimed assimilatory homogeneity of the American character. Having already started to re-imagine Ethnic American historical legacies in the U.S. as of having been among the first on the American continent, it still remains to provide for the respective present-day social realities as of being among the last in terms of power structures. [...]