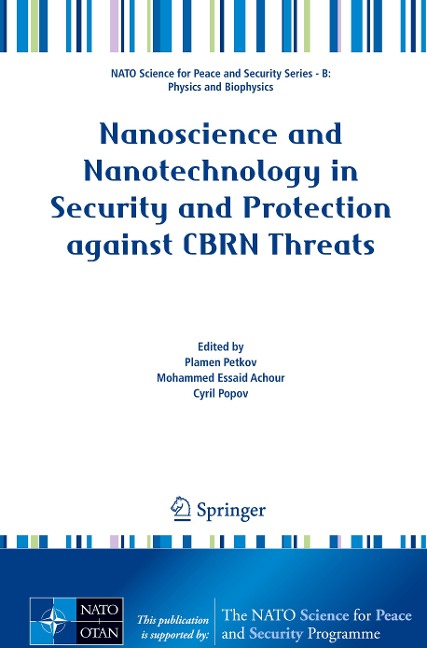 Nanoscience and Nanotechnology in Security and Protection against CBRN Threats

This book is based on the lectures and contributions of the NATO Advanced Study Institute on "Nanoscience and Nanotechnology in Security and Protection Against CBRN Threats" held in Sozopol, Bulgaria, September 2019. It gives a broad overview on this topic as it combines articles addressing the preparation and characterization of different nanoscaled materials (metals, oxides, glasses, polymers, carbon-based, etc.) in the form of nanowires, nanoparticles, nanocomposites, nanodots, thin films, etc. and contributions on their applications in diverse security and safety related fields. In addition, it presents an interdisciplinary approach drawing on the Nanoscience and Nanotechnology know-how of authors from Physics, Chemistry, Engineering, Materials Science and Biology. A further plus-point of the book, which represents the knowledge of experts from over 20 countries, is the combination of longer papers introducing the background on a certain topic, and brief contributions highlighting specific applications in different security areas.

Plamen Petkov received his degree in Physics from the University of Chemical Technology and Metallurgy, Sofia, Bulgaria in 1981 and his PhD in Physics in 1994. He has worked at postdoc positions in I. Physicalisches Institut, RWTH, Aachen, Germany, University of Odense, Denmark, University of Bonn, Germany. Actually, he is a full professor of applied physics at the University of Chemical Technology and Metallurgy and head of Physics Department and Thin Film Technology Laboratory. His research activity is mainly devoted to electrical and optical properties of semiconductor materials for various technological applications. He is author of more than 170 archival refereed journal papers, co-author and co-editor of 5 books, 10 patents and inventions on topics of solid state physics.

Mohammed Essaid Achour received "Thèse de 3ème cycle" from the Bordeaux University, France, and "Thèse d'état" from the Moulay Ismail University of Meknes, Morocco, degrees in field of Physics in 1983 and 1991, respectively. From 1983 to 1992 he was "Maitre assistant" at Sciences Faculty of Meknes, Morocco, "Maitre de Conférence" (1992-1996) and Professor. He joined the Sciences Faculty at Kenitra in 1999. From 1997 to 2011 he was also teacher at the Royal Military Academy at Meknes. His research interests include electromagnetic and electrical properties, microwave characterization and dielectric responses of the composite materials including carbon dots, graphene, carbon nanotubes, carbon black, and natural fibers in the natural or synthetic polymers. He has co-authored more than 90 peer-reviewed scientific papers published in leading refereed journals, 13 book chapters and 6 guest editorials. He was founder and Chair of several editions of the International Symposium on Dielectric Materials and Applications (ISyDMA) and the Moroccan Spring School on Advanced Materials (MoSSAM), and Chair of the Fourth International Meeting on Dielectric Materials (IMDM'4; Marrakech, Morocco, May 2013).

Cyril Popov received his MSc in Chemical Engineering in 1990 and PhD in 1994 from the University of Chemical Technology and Metallurgy, Sofia, Bulgaria. In the period 1995-1997 he was a Postdoctoral Fellow at the National Institute of Advanced Industrial Science and Technology (AIST), Tsukuba, Japan and at the Central Laboratory of Photoprocesses, Bulgarian Academy of Sciences, Sofia, working on preparation and investigation of novel materials in the ternary system B-C-N. In 1998 he joined the Institute of Nanostructure Technologies and Analytics (INA), University of Kassel, Germany, where at the present he is a Group leader. His current research interests cover deposition, characterization, nanostructuring and applications of nano- and ultrananocrystalline diamond films and monocrystalline diamond. He is co-author of more than 120 publications, 25 contributions to conference proceedings and 18 book chapters, co-editor of 5 books.