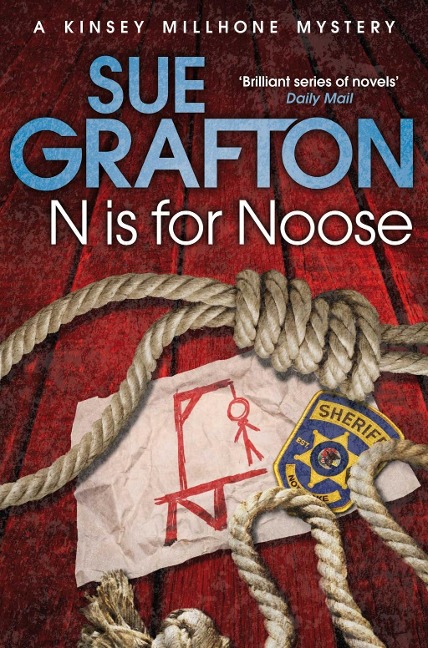 N is for Noose is the fourteenth in the Kinsey Millhone mystery series by Sue Grafton.

Sometimes I think about how odd it would be to catch a glimpse of the future, a quick view of events lying in store for us. Some moments we saw would make no sense at all and some, I suspect, would frighten us beyond our endurance . . .

Early spring in the Sierra Nevada, bringing the usual driving sleet and snow. Private investigator Kinsey Millhone is on her way west when she detours into Nota Lake (pop. 2356) to check out a new client. And encounters a chill she can scarcely believe.

Only six weeks have passed since sheriff's detective Tom Newquist died of a heart attack. His widow is sure he was keeping secrets from her just before he died - and she hires Kinsey to find out exactly what.

But all Kinsey can uncover is that Newquist led an exemplary life, so what could he possibly have to conceal? And why has the town, to the last threatening redneck, closed ranks on her?

Kinsey's on the point of giving up. Until she discovers a chilling new clue: a childish drawing of a thick length of rope - fashioned into a hangman's noose . . .