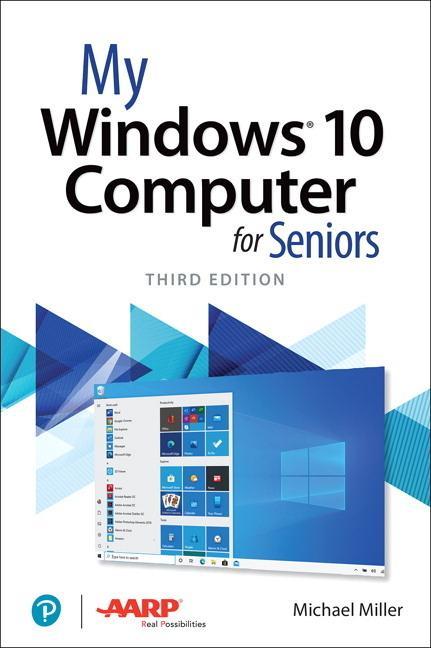 My Windows 10 Computer for Seniors

My Windows® 10 Computer for Seniors is an easy, full-color tutorial on the latest operating system from Microsoft.

Veteran author Michael Miller is known for his ability to explain complex topics to everyday readers. Michael wrote this book from the 50+ point of view, using step-by-step instructions and large, full-colour photos to cover all the most popular tasks.

The second edition of this book was written on the Windows 10 release 1709 in Fall 2017. Since then we've had four additional releases — 1803 (Spring 2018), 1809 (Fall 2018), 1903 (Spring 2019), and 1909 (Fall 2019) — with an additional release (2004) scheduled for Spring 2020. There's a bit of catching up to do.
What's new in this edition?
This new third edition will cover all the changes made in the past five Windows updates as well as changes in the computer hardware market. It will also cover changes to popular social networks and computer software and websites.
New or updated coverage on a chapter-by-chapter basis is extensive, and all screen images will be reshot with the current version of the Windows 10 interface.

Michael Miller is a popular writer and commentator on technology and digital lifestyle topics. He has authored more than 75 non-fiction books, which have collectively sold more than 1 million copies and have been translated into more than a dozen languages. His best-selling books include Absolute Beginner's Guide to Computer Basics, Tricks of the eBay Masters, How Home Theater and HDTV Work, and Googlepedia: The Ultimate Google Resource. Read more about Michael's books and other projects at www.molehillgroup.com.