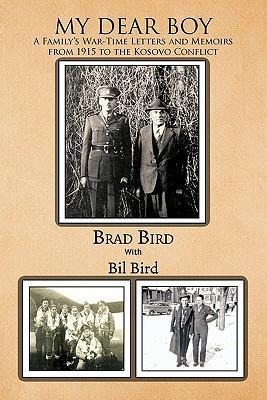 Brad Bird has been a journalist for more than twenty-five years, covering conflicts in various parts of the globe. My Dear Boy, which includes his memoirs, offers a compilation of letters and stories describing his family's contributions to Canada. Brad's brother Bil, who has a passion for family history, also assisted with the family survey in the introduction.

My Dear Boy describes the contributions of the Bird family to the defence of Canada and the field of war reporting. The introduction surveys the history of this old Canadian family, which began with the arrival of James Curtis Bird from England to York Factory on Hudson Bay in 1788. Other key relatives examined include Jimmy Jock Bird and Dr. F. V. Bird of Boissevain, Manitoba.

This family history explores the lives of those who fought as soldiers in World Wars I and II, with a focus on Lt. J. M. Bird of the Princess Patricia's Canadian Light Infantry, who fought his way up the boot of Italy in 1944. It also offers 137 letters by and to Clayton Bird, a Halifax bomber pilot in Snowy Owl Squadron during World War II, whose experience was made richer by the many letters to the pilot from family and friends.

Learn about the history of this fascinating family in My Dear Boy.