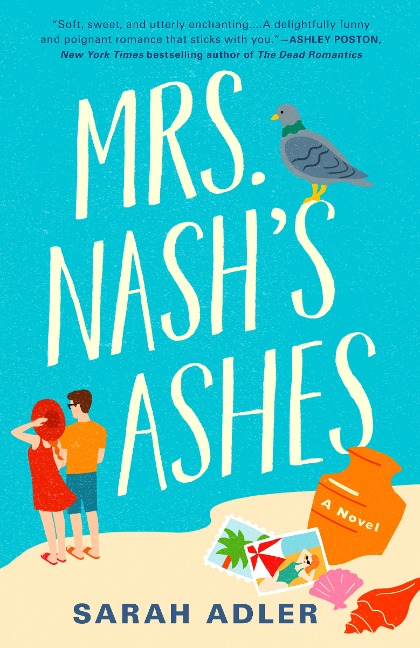 A starry-eyed romantic, a cynical writer, and (the ashes of) an elderly woman take the road trip of a lifetime that just might upend everything they believe about true love.

Millicent Watts-Cohen is on a mission. When she promised her elderly best friend that she’d reunite her with the woman she fell in love with nearly eighty years ago, she never imagined that would mean traveling from D.C. to Key West with three tablespoons of Mrs. Nash’s remains in her backpack. But Millie’s determined to give her friend a symbolic happily-ever-after, before it’s (really) too late—and hopefully reassure herself of love’s lasting power in the process.

She just didn’t expect to have a living travel companion.

After a computer glitch grounds flights, Millie is forced to catch a ride with Hollis Hollenbeck, an also-stranded acquaintance from her ex’s MFA program. Hollis certainly does not believe in happily-ever-afters—symbolic or otherwise—and makes it quite clear that he can’t fathom Millie’s plan ending well for anyone.

But as they contend with peculiar bed-and-breakfasts, unusual small-town festivals, and deer with a death wish, Millie begins to suspect that her reluctant travel partner might enjoy her company more than he lets on. Because for someone who supposedly doesn’t share her views on romance, Hollis sure is becoming invested in the success of their journey. And the closer they get to their destination, the more Millie has to admit that maybe this trip isn’t just about Mrs. Nash’s love story after all—maybe it’s also about her own.

Sarah Adler writes romantic comedies about lovable weirdos finding their happily ever afters. She lives in Maryland with her husband and daughter and spends an inordinate amount of her time yelling at her mischievous cat to stop opening the kitchen cabinets. Mrs. Nash’s Ashes is her debut novel. You can find her on Twitter (@sarahaadler) and Instagram (@sarahadlerwrites).