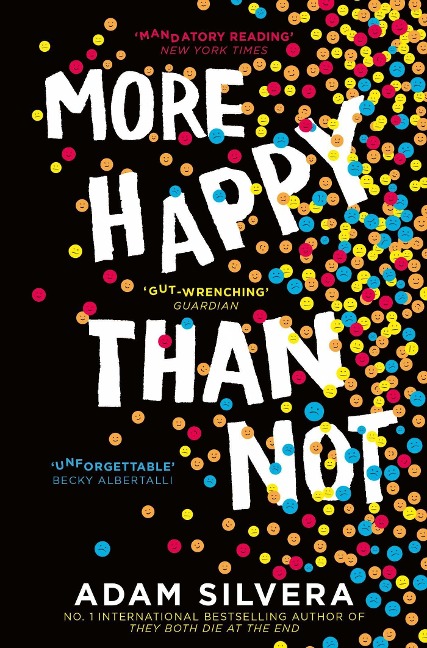 More Happy Than Not

In the months after his father's suicide, it's been tough for sixteen-year-old Aaron Soto to find happiness again - but he's still gunning for it. With the support of his girlfriend Genevieve and his overworked mom, he's slowly remembering what that might feel like. But grief and the smile-shaped scar on his wrist prevent him from forgetting completely.

When Genevieve leaves for a couple of weeks, Aaron spends all his time hanging out with this new guy, Thomas. Aaron's crew notices, and they're not exactly thrilled. But Aaron can't deny the happiness Thomas brings or how Thomas makes him feel safe from himself, despite the tensions their friendship is stirring with his girlfriend and friends. Since Aaron can't stay away from Thomas or turn off his newfound feelings for him, he considers turning to the Leteo Institute's revolutionary memory-alteration procedure to straighten himself out, even if it means forgetting who he truly is.

Why does happiness have to be so hard?

Adam Silvera was born and raised in the Bronx. He has worked in the publishing industry as a children's bookseller, marketing assistant at a literary development company, and book reviewer of children's and young adult novels. His debut novel, More Happy Than Not, received multiple starred reviews and is a New York Times bestseller, and Adam was selected as a Publishers Weekly Flying Start. He writes full-time in New York City.

The Perks of Being a Wallflower YA edition

The Sky Is Everywhere

Turtles All the Way Down

History Is All You Left Me

Tales of the City

A Ladder to the Sky