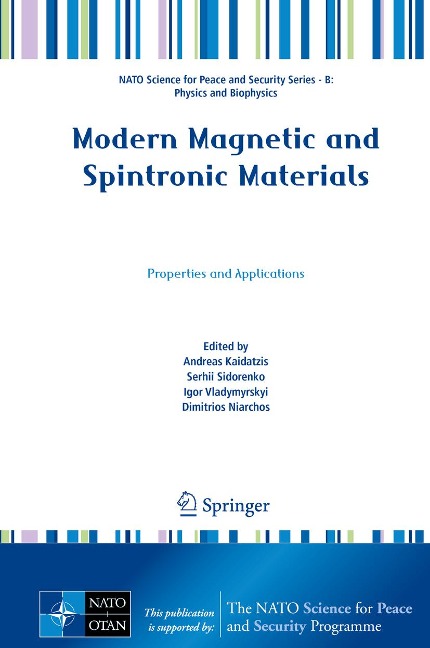 All of the above-mentioned applications rely on the properties of the materials used. These properties in turn depend on intrinsic and extrinsic material parameters. The former are related to the actual elements used and their properties, e.g. atomic magnetic moment and exchange interaction between atoms; the latter are related to the structural and microstructural properties of the materials used, e.g. their crystal structure, grain size, and grain boundary phases.

Focusing on state-of-the-art magnetic and spintronic materials, this book will introduce readers to a range of related topics in Physics and Materials Science. Phenomena and processes at the nanoscale are of particular importance in this context; accordingly, much of the book addresses such topics.

Dr. Kaidatzis holds a first degree in Physics (2003) and a postgraduate degree in Materials Physics (2005), obtained from the Aristotle University of Thessaloniki, Greece and a doctoral degree in Solid State Physics obtained from the University of Paris 11 (2008) as a Marie-Curie Fellow. He has worked as postdoctoral Researcher at the Institute of Microelectronics of NCSR "Demokritos" (2010-2011) and at the Institute of Microelectronics of Madrid (2011-2013) in the framework of an Individual Marie-Curie Fellowship. His work was focused on the study of magnetic thin films and nanostructures using magnetic force microscopy. Since May 2013 he is working as a Research Associate at the Institute of Nanoscience and Nanotechnology of NCSR "Demokritos", studying magnetic and spintronic materials for memories, data recording, sensors, and permanent magnets applications. Dr. Kaidatzis has participated in several international research projects, granted from the European Commission, the Spanish research council (CSIC), and the Hellenic General Secretariat for Research and Technology. He has published his work in 18 peer-reviewed journals and presented more than 50 abstracts in national and international conferences.

Prof. Dr. Sidorenko graduated from the Moscow Institute of Steel and Alloys (1971). In 1987 he defended his doctoral thesis. Research activities of Prof. Sidorenko are linked with advanced technologies on the basis of theoretical and experimental investigations of diffusion processes, phase formation and other phenomena in different metallic materials. He authored over 300 papers in area of physical materials science. Under his leadership, 24 PhD theses were defended.

Prof. Dr. Niarchos obtained his B.Sc. and Ph.D. in Physics-Materials Science from National Kapodestrian University of Athens, Greece in 1972 and 1980 respectively. He holds also an MBA of R&D from Loyola University in 1985. From 1978 to 1981 he was IAEC Distinguish Post-Doctoral Researcher at Argonne National Lab and from 1981 to 1985 he was Assistant Professor at the Illinois Institute of Technology, Chicago, USA. He then moved to the Institute of Materials Science of the NCSR "Demokritos" in 1985 as Senior Researcher. He was promoted to the Director of Research (Grade A) researcher in 1992. From 1994-1999 he served as the Director of Institute of Materials Science of the NCSR "Demokritos" and from 1996-1999 he was elected as Vice President of the NCSR "Demokritos". From 2005-2010 he was elected as Director and President of the Board of the NCSR "Demokritos". He is studying magnetic materials for novel permanent magnets, ultrahigh recording media, magnetic memories, and magnetic micro-nanolaminated structures for UHF DC-DC converters. He is the author and co-author of more than 490 publications with more than 8000 citations and has managed more than 35 National and EU projects with a budget of approximately 12 MEURO. He had served as advisor for the Greek Government, NATO and the EC. He holds 6 patents related to nanomaterials, thermoelectrics and high entropy alloys for permanent magnets.

Detection of microwave and terahertz-frequency signals in spintronic nanostructures

Microwave characterization of Y3Fe5O12 ferrite under a dc-magnetic field