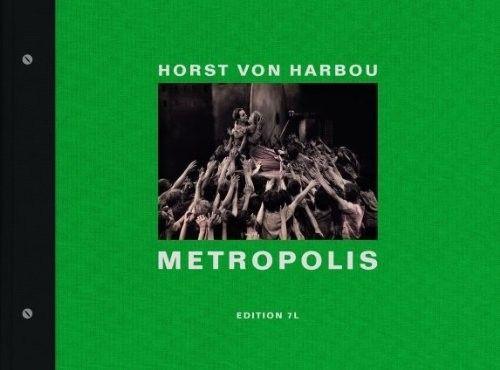 Fritz Lang's Metropolis (1927) is a defining film of the silent era and science fiction genre. But the work of the film's
still photographer Horst von Harbou has remained obscure. Von Harbou, brother of Thea von Harbou, Lang's then wife
and co-screenwriter of Metropolis, photographed filmed scenes as well as off-camera action, and made an album of
thirty-five photographs which he gave to the film's young star Brigitte Helm. The book Metropolis is a careful reconstruction
of this album, showing the photographs and some of their backsides which feature hand-written notes. Von
Harbou's photographs not only offer a rare insight into Lang's film, but have been crucial in reconstructing missing
scenes from it.

Horst von Harbou was born in 1879 in Hutta, Posen, and died in 1953 in Potsdam-Babelsberg. Very little is known about von Harbou, except for the films on which he worked as a still photographer: these include Mensch ohne Namen (1932), Starke Herzen im Sturm (1937) and Augen der Liebe (1951).