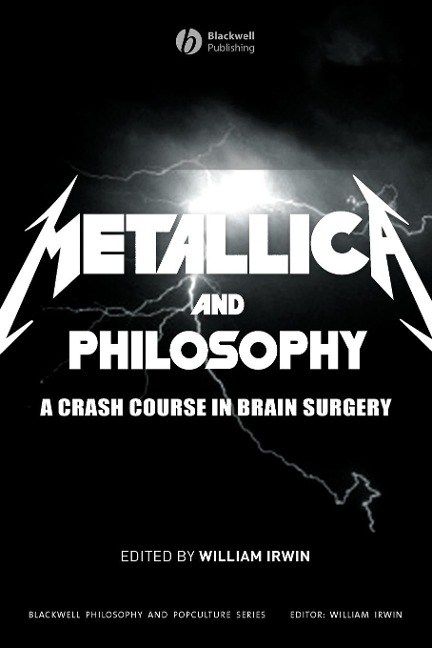 A Crash Course in Brain Surgery

Hit the lights and jump in the fire, you're about to enter the School of Rock! Today's lecture will be a crash course in brain surgery. This hard and fast lesson is taught by instructors who graduated from the old school--they actually paid $5.98 for The $5.98 EP. But back before these philosophy professors cut their hair, they were lieutenants in the Metal Militia.

Metallica is the "thinking man's" metal band and the headbanger's CNN. Snobs and music critics have often dismissed Metallica as mindless noise; we're here to set the record straight. "In pursuit of truth no matter where it lies," this book considers questions that philosophers have been pondering for ages, including: Does Metallica's music provide an Aristotelian catharsis or does it just make kids go postal? Can "Fade to Black" save you from suicide? Are we all in the "Sanitarium"? How can we "Escape" to be free? What can Nietzsche tell us about the God That Failed? What can Descartes and "One" tell us about the relationship between the mind and the body? Did Lars make a sound argument against Napster?

Metallica is more than just a band, and this book is much more than just a ticket to ride down memory lane. This is an in-depth analysis of the soundtrack to your life. So start your CD player, fire up your iPod, or, better yet, break out the old vinyl. We're going' for a ride with the four horsemen, and a few philosophers too.

William Irwin is Assistant Professor of Philosophy at King's College, Pennsylvania. He has edited Seinfeld and Philosophy: A Book about Everything and Nothing; The Simpsons and Philosophy: The D'oh! of Homer (with Mark T. Conard and Aeon J. Skoble); and Critical Thinking: A Student's Introduction (with Gregory Bassham, H. Nardone, and J. Wallace). He is also the author of Intentionalist Interpretation: A Philosophical Explanation and Defense and editor of The Death and Resurrection of the Author.

Who's Who in the Metal Miltia.

Heroes of the Day: Acknowledgments.

DISC 1 ON THROUGH THE NEVER.

1. Whisper Things Into My Brain: Metallica, Emotion, and Morality.

3. Alcoholica: When Sweet Amber Becomes the Master of Puppets.

4. Through the Mist and the Madness: Metallica's Message of Nonconformity, Individuality, and Truth.

5. The Metal Militia and the Existentialists' Club.

6. The Struggle Within: Hetfield, Kierkegaard, and the Pursuit of Authenticity.

7. Metallica, Nietzsche, and Marx: The Immorality of Morality.

8. Metallica's Existential Freedom: From We to I and Back Again.

9. To Live is to Die: Metallica and the Meaning of Life.

10. Madness in the Mirror of Reason: Metallica and Foucault on Insanity and Confinement.

11. Ride the Lightning: Why Not Execute Killers?.

12. Living and Dying as One: Suffering and the Ethics of Euthanasia.

13. Fade to Black: Absurdity, Suicide, and the Downward Spiral.

Justin Donhauser and Kimberly A. Blessing.

15. Trapped in Myself: "One" and the Mind-Body Problem.

16. Is It Still Metallica? On the Identity of Rock Bands Over Time.

DISC 5 FANS AND THE BAND.

17. Metallica Drops a Load: What Do Bands and Fans Owe Each Other?.

18. The Unsocial Sociability of Humans and Metal Gods.

19. Boys Interrupted: The Drama of Male Bonding in Some Kind of Monster.

20. Justice for All? Metallica's Argument Against Napster and Internet File Sharing.