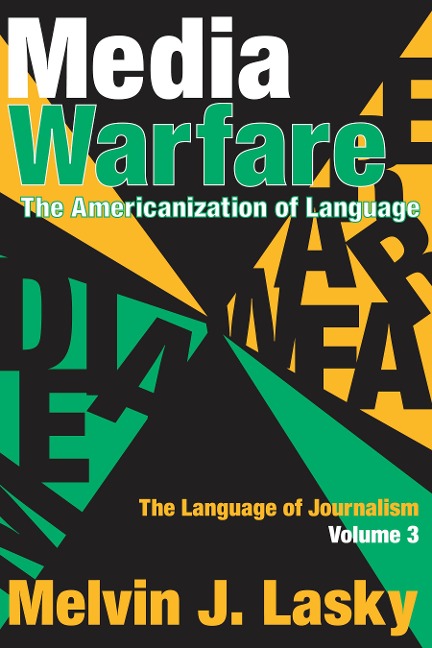 The Americanization of Language

Media Warfare is the concluding volume of Melvin Lasky's monumental The Language of Journalism, a series that has been praised as a ""brilliant"" and ""original"" study in communications and contemporary language. Firmly rooted in the critical tradition of H. L. Mencken, George Orwell, and Karl Kraus, Lasky's incisive analysis of journalistic usage and misusage gauges both the cultural and political health of contemporary society as well the declining standards of contemporary journalism.As in the first two volumes, Lasky's scope is cross-cultural with special emphasis on the sometimes conflicting, sometimes mutually influential styles of American and British journalistic practice. His approach to changes in media content and style is closely keyed to changes in society at large. Media Warfare pays particular attention to the gradual easing and near disappearance of censorship rules in the 1960s and after and the attendant effects on electronic and print media. In lively and irreverent prose, Lasky anatomizes the dilemmas posed by the entrance of formerly ""unmentionable"" subjects into daily journalistic discourse, whether for reasons of profit or accurate reporting. He details the pervasive and often indirect influence of the worlds of fashion and advertising on journalism with their imperatives of sensationalism and novelty and, by contrast, how the freeing of language and subject matter in literature--the novels of Joyce and Lawrence, the poetry of Philip Larkin--have affected permissible expression for good or ill. Lasky also relates this interaction of high and low style to the spread of American urban slang, often with Yiddish roots and sometimes the occasion of anti-Semitic reaction, into the common parlance of British no less than American journalists.Media Warfare concludes with prescriptive thoughts on how journalism might still be revitalized in a ""post-profane"" culture. Witty, timely, and deeply learned, the three volumes of The Language of Journalism are a c