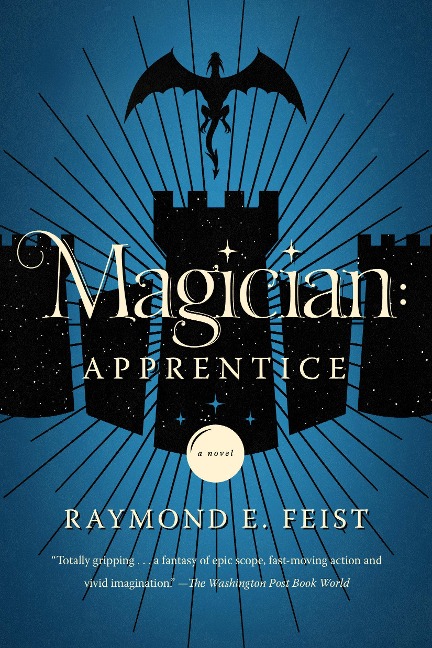 The Riftwar Saga-a classic of fantasy literature which no true fan should be without-opens with this tale of magic, might, and adventure.

"One of the world's most successful fantasy fiction authors."-The Guardian

Raymond E. Feist's Riftwar Saga-a classic of fantasy literature which no true fan should be without-opens with this tale of magic, might, and adventure.

Orphaned boy Pug is apprenticed to a powerful court magician named Kulgan in the world of Midkemia. Though ill at ease with the normal ways of wizardry, Pug soon earns his place as a squire after saving the life of one of the royals at court.  But his courage will be tested still further when dark beings from another world open a rift in the fabric of spacetime to rekindle the age-old battle between the forces of Order and Chaos.

Now the lives of Pug and his friend Tomas are thrown into danger and disarray. Only Pug's strange brand of magic might yet turn the tide, in the struggle to repel the invaders and restore peace to Midkemia.

"Understandably, this is one of the highest-regarded books in the world."-Fantasy Book Review

"Most exciting . . . A very worthy and absorbing addition to the fantasy field."-Andre Norton

"The best new fantasty in years . . . has a chance of putting its aughor firmly on the trone next to Tolkien-and keeping him there."-The Dragon Magazine

Raymond E. Feist is the internationally bestselling author or co-author of more than thirty novels, including Magician, Silverthorn, A Darkness at Sethanon, and Faerie Tale, as well as short stories in bestselling anthologies, including Legends and Legends II, edited by Robert Silverberg. Feist is a graduate of the University of California, San Diego, and still lives in San Diego. He is also executive producer for a scheduled TV series based on his Riftwar Cycle. He is an ardent fan of several sports teams around the world, including the Wolverhampton Wanderers, the St. George Illawara Dragons, the Los Angeles Rams and Lakers, and the San Diego Padres. His other interests include really good whisky, ridiculous numbers of great films, all varieties of music, yelling at politicians on TV, and the company of very smart people.